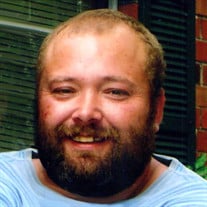 Arnell Jay Wallace, 52, a resident of Cleveland, passed away Thursday, December 30, 2021 in a Chattanooga hospital. Arnell was born in LaFollette, Tennessee. He was a small engine mechanic. He loved the outdoors and could always be found on the river camping and fishing. Arnell had a kind and generous spirit and never met a stranger. His greatest talent was the ability to put a smile on anyone's face and offer a contagious laugh. Most of all, Arnell will be remembered for the extreme amount of love that he had for his wife Joy and his family. Arnell is proceeded in death by both his maternal and paternal grandparents, his father Walter Wallace, his mother Geneviee Robbins Wallace, brothers Larry, Leo, and Tommy Wallace, and his grandson Carson Stoops. He was a member of Philadelphia Baptist Church. Survivors include his wife of 32 years Joy Wallace of Cleveland. Daughters Erika Stoops and her husband Daniel, and Alena Taynor, all of Cleveland. Sons Jacob Wallace and his wife Faith, and Jared Wallace, all of Cleveland. Grandchildren Zachary and Elizabeth Flint and Tyson Stoops of Cleveland. Leo, Lilly, Xena, and Elysea Taynor of Cleveland. Nathaniel, Summer, Heaven, and Alijah Wallace of Cleveland, and Aubree Farley of Cleveland. He is also survived by sisters Nancy Kitts of LaFollette, Patricia Massey of Cleveland, Tilda Trew of Apison, Kathy Viola of Cleveland, Mona Brown of Benton, and Darlene Bowen, Becky Chastain, and Genell Trimble, all of Cleveland. Brothers Alan Ray Wallace and Lonnie Wallace, all of Cleveland, and several cousins, nieces and nephews. The Remembrance of Life Service will be conducted on Sunday, January 2, 2022 at 2 P. M. at the Jim Rush Funeral and Cremation Services North Ocoee Chapel with Pastor Brad Lane officiating. Interment will follow in the Dill Cemetery in Polk County with Jeff, Tommy Joe, Chris "Tinker", Jason, James, Timmy and Derek Wallace serving as casket bearers. The family will receive friends from 12:30 until 2 P. M. Sunday at the Jim Rush Funeral and Cremation Services North Ocoee Chapel who has charge of the arrangements. You may share your condolences and your memories with the Wallace family at www.jimrushfuneralhomes.com

Arnell Jay Wallace, 52, a resident of Cleveland, passed away Thursday, December 30, 2021 in a Chattanooga hospital. Arnell was born in LaFollette, Tennessee. He was a small engine mechanic. He loved the outdoors and could always be found on... View Obituary & Service Information

The family of Arnell Jay Wallace created this Life Tributes page to make it easy to share your memories.

Arnell Jay Wallace, 52, a resident of Cleveland, passed away...

Send flowers to the Wallace family.