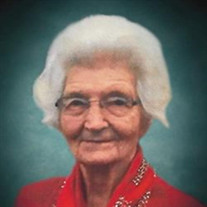 Avadene Brown, age 95, was called home to be with her Lord and Savior on February 26, 2021. Avadene was born May 12, 1925 in Haywood County North Carolina to the late Jerry Levi and Estelle Brookes Hipps. Avadene graduated from high school in 1942 from the Church of God Bible Training School (later moved and renamed Lee College) in Sevierville, Tennessee. Upon graduation, she was employed a few years by Champion Paper and Fiber Company in Canton, NC. After her marriage to Robert W. Brown in 1945, they made their home on Canton, NC. Their early years of marriage were centered around raising their two children, Ed and Bobbie, in a loving Christian home and being actively involved in their church. They were a dedicated couple working closely together in every aspect of their lives. One of Robert's nicknames for Avadene was "Chicken." Many of his co-workers called him "Biscuit Brown;" thus, they made a great "Chicken and Biscuit" combo. Avadene was a kind, caring, encourager who touched many lives. Having a rental business in their later years, she and Robert often gave free rent to those in need. She was a faithful member of the Mountain View Church of God while living in Canton where she played he piano for many years. Having begun playing the piano in church at a very young age, music was indeed, a very important part of her life. After the passing of her husband Robert, she moved to Cleveland, TN to be near her son and daughter in law, Ed and Teresa Brown. While living there she attended the North Cleveland Church of God regularly until she moved to Legacy Village of Cleveland, an assisted living facility here in Cleveland, where she lived her final years. Her time at Legacy was a rewarding experience for her. She was very happy and content and often played the piano for the residents. Avadene dearly loved her family and shared her faith and wisdom with her children, grandchildren, and many of her great grandchildren. She was known for her laughter and declared that truly "laughter is like a medicine." She especially enjoyed planning enjoyable activities for her grandchildren and great grandchildren during their holiday visits. She had a repertoire of "good clean jokes" that she enjoyed sharing with family and friends, often bringing a smile even in the midst of a crisis. Leaving behind a beautiful legacy,we give thanks for the many years we were blessed to share with Avadene Brown. She is now in her Heavenly home rejoicing in that complete "peace that passeth all understanding," the peace that she continually shared with others while on earth. In addition to the passing of her parents and her husband, Robert, of whom she shared 67 wonderful years, she was preceded in death by her beloved stepmother, Willie Hipps, her sister, Berndina Hipps and her two brothers, Arvesta Hipps and Clinton Hipps. Surviving are her two children: son Ed and wife Dr. Teresa Brown of Cleveland,TN, and daughter Bobbie and husband Roger Varner of Mercersburg, PA; five grandchildren: Jada and husband J.P. Westfield; Ansley and husband Martin Watley; Tiffany and husband Richard Gillette; Alaric and wife Renee Varner; and Bobby Alan Varner; ten great-grandchildren: Jalen and Jaleya Westfield; Raylee and Adisson Watley; Dakota, McKinzie, Alexander, and Gideon Gillette; Aubrey and Aiden Varner; Cassidy Harris; and Nehemyah, Eden, and Ava Varner The Remembrance of Life Service will be conducted on Thursday, March 4, 2021 at 1:00 P. M. at the North Cleveland Church of God, Main Sanctuary with Pastor Mark Williams and Pastor Mitch Maloney officiating. Graveside Services will be conducted on Friday, March 5, 2021 at 1:00 P. M. at the Bon-A-Venture Cemetery in Canton, North Carolina with family and friends serving as casket bearers. The family will receive friends from 12:00 until 1:00 P. M. Thursday at the North Cleveland Church of God, Main Sanctuary. Due to COVID concerns, masks and social distancing will be observed for the visitation and for the service. On behalf of the church and the funeral home, thank you for your understanding. For those family and friends who cannot attend the service, you may watch the service via live stream by going to nccog.com. The Jim Rush Funeral and Cremation Services North Ocoee Chapel has charge of the arrangements. You may share your condolences and your memories with the Brown family at www.jimrushfuneralhomes.com.

Avadene Brown, age 95, was called home to be with her Lord and Savior on February 26, 2021. Avadene was born May 12, 1925 in Haywood County North Carolina to the late Jerry Levi and Estelle Brookes Hipps. Avadene graduated from high school... View Obituary & Service Information

The family of Avadene Brown created this Life Tributes page to make it easy to share your memories.

Avadene Brown, age 95, was called home to be with her Lord and...

Send flowers to the Brown family.