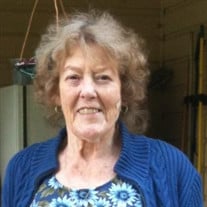 We honor the life and passing of Sue Matthews who was beloved artist, poet, teacher, friend, advocate, and supporter for so many throughout Cleveland and beyond. Born in Franklin, NC, Sue moved to Cleveland with her family, graduating from Bradley High School in 1953, followed by studies at Lee University. During her many years of service to others, she worked as substitute teacher at North Lee Elementary School, served as Boy Scout Den Mother for a local troop, helped found the Swiss Alley group of shop owners, served as a charter member of the Cleveland Creative Arts Guild, assisting in the establishment of Cleveland’s first art gallery, the Night Gallery, and co-coordinating many theater productions for the Guild. Sue also worked with local artists to found the Nillie Bipper Arts and Crafts Festival. One activity significant to her was her portrayal of Mrs. Santa Claus at the Village Mall. For almost 15 years, she provided love and hope to so many children, a vital mission to her, creating long-lasting joy with her sparkling eyes and sweet smile in so many family memories through portraits with Mrs. Claus. North Cleveland Baptist Church received her sweet service in several capacities such as serving as Church Hostess, Sunday School Teacher, Youth Volunteer, Children’s Ministries, helping form the NCBC Preschool, volunteering and supporting numerous ministries. Preceded in death by her parents, Jesse T. McKay and Florence McKay of Cleveland; her sister, Arbutus “Kay” McConnell of Salt Lake City, Utah; her brother, Eugene McKay of Lake Wales, Florida and her husband, Jack C. Matthews of Cleveland, Sue is survived by her sister, Katie Foy of Orlando, Florida; her son and daughter-in-law, Jeff and Carol Matthews of Cleveland; her daughter and son-in-law, Judy and Jim Mason also of Cleveland; her son Joe Matthews of Memphis, TN and her daughter, Holly Matthews of Lawrenceville, GA; grand-children, spouses and great-grandchildren include: Courtney and Dan Marzahl of Knoxville, TN with Macy and MacKenzie Marzahl; Jessica and Michael Brown of Cleveland, TN with Skye Brown; Nick and Cheyna Mason of Monterey, VA with Lauren, James and Tucker Mason and Amara Matthews Jackson of Lawrenceville, GA. Remembered as a beloved daughter, wife, mother, sister, aunt, grandmother and friend to so many people. Sue was an inspiration of creativity, beauty and most of all devotion and service to her Savior, Jesus Christ. Her life is celebrated by all in her generous circles of influence. A Remembrance of life service will be held at 6 o’clock Thursday at Jim Rush Funeral and Cremation Services North Ocoee St. Chapel with Pastor Jay McCluskey officiating. The interment will be held Friday at 10am at Hilcrest Cemetery. The family will receive friends Thursday from 4 until 6pm at the funeral home. The family requests that in lieu of flowers donations be made in Sue’s memory to North Cleveland Baptist Church, North Ocoee St., Cleveland TN., 37311.

We honor the life and passing of Sue Matthews who was beloved artist, poet, teacher, friend, advocate, and supporter for so many throughout Cleveland and beyond. Born in Franklin, NC, Sue moved to Cleveland with her family, graduating from... View Obituary & Service Information

The family of Betty "Sue" Matthews created this Life Tributes page to make it easy to share your memories.

We honor the life and passing of Sue Matthews who was beloved...

Send flowers to the Matthews family.