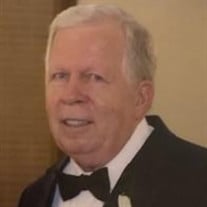 Charles Ernest Whitmire, age 84, a resident of Cleveland, went to his heavenly home on Tuesday November 24, 2020 at the family residence after a 21 year battle with Parkinsons. He was surrounded by his loving family. Charles was born on September 17, 1936 in Cleveland, Tennessee and he was the son of the late Amy Hixson Whitmire and Ernest Whitmire. His daughter, Alisa Smith and his infant sister, Ernestine Whitmire also preceded him in death. Charles was a member of the 1954 graduating class at Bradley Central High School. He worked for Magic Chef as a district sales manager for many years before leaving to open his own small business, Global Communications, before his retirement. He was a U. S. Army Veteran and he was a member of the Wesley Memorial United Methodist Church. He leaves behind to cherish his memory his loving wife of 43 years, Linda Whitmire; his children: Charles Whitmire Jr. and his wife Becca, Timothy Whitmire, Erin Rains and her husband Kyle, and Marc Whitmire and his wife Jessica; his grandchildren: Courtney Burke, Melissa Dratnol and her husband Joe, Ashley Whitmire, Sydney Whitmire, Jackson Rains, Caroline Rains; his brothers: Ralph Lamar Whitmire and his wife Erma and Samuel Lewis Whitmire; his sisters: Mary Carolyn Kibble, Martha Joy Boyd and her husband Don, Theresa Gail Poteet, and Pamela Joan Trotter and her husband Harold; as well as his five great grandchildren; his very special neighbors and friends: Phil and Yanna Higgins, Brandon and Tiffany Brooks, and Marlene Morrow, and numerous nieces and nephews also survive. The Remembrance of Life Memorial Service will be conducted on Tuesday, December 1, 2020 at 6:00 P. M. at the Wesley Memorial United Methodist Church with Reverend Kenneth Scoggins, Reverend Ramon Torres, Reverend Chris Rouse and Yanna Higgins officiating. The family would like to say thank you to Hospice of Chattanooga for their care of Mr. Whitmire. The family request in lieu of flowers, memorials be made to Emory Healthcare Movement Disorders Program by going to emoryhealthcare.org. The Jim Rush Funeral and Cremation Services North Ocoee Chapel has charge of the arrangements. You may share your condolences and your memories with the Whitmire family at www.jimrushfuneralhomes.com.

Charles Ernest Whitmire, age 84, a resident of Cleveland, went to his heavenly home on Tuesday November 24, 2020 at the family residence after a 21 year battle with Parkinsons. He was surrounded by his loving family. Charles was born on September... View Obituary & Service Information

The family of Charles Ernest Whitmire created this Life Tributes page to make it easy to share your memories.

Send flowers to the Whitmire family.