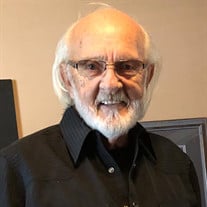 Cletus E. Turnbow, 78, went to meet his heavenly Father on March 17, 2020.Cletus was born in Angola, Indiana to Nathan and Mary Turnbow, their sixth child, on July 20, 1941. He was a Master Cosmetologist in the states of Indiana and Texas. Cletus was a master of many things. He always had a vision or dream to improve and work on things for his family. He didn’t hesitate to let you know he loved you. He was a big believer in “there is no time like the present” when something needed to be done. He always wanted to be the best version of himself and wanted that for his children and grandchildren. Cletus made friends like Lays makes potato chips. He never met a stranger and would start a conversation with anyone, anywhere at any time. He didn’t hesitate to tell them about Jesus and how he gave his heart to Him. He loved going to a lively church and he found that in Dwelling Place. He was an avid Dallas Cowboy fan although he would cheer for the Colts when the Cowboys missed the playoffs. He loved to play golf and watched endless hours of golf. He would watch the entire season of baseball (all 162 games and then the playoffs plus the World Series). He didn’t care who was playing. He just wanted to watch baseball. Boxing was another sport he liked to watch. He would have watched more basketball if his wife could have tolerated the sneaker squeak on the hardwoods. Cletus loved to tell jokes to get everyone laughing and would often tell the same jokes over and over…. decade after decade. Cletus will be greatly missed by his wife, Karen, of 30 years. Cletus is survived by: • Greg Turnbow of Silverthorne, CO • Lisa Moorman of Cody, WY • Anthony Chastain and his wife, Megan of Jersey, GA. Four grandchildren – Makaiya, Lochlan, Aedynne and Celtigh whom he loved dearly. Also missing Cletus will be his brothers and their wives: Max & Coleen Turnbow, Brownie & Charlotte Turnbow, VJ and Janet Turnbow. Denna was like a daughter, Jessie May was like a sister and Amanda brought so much joy in his life and all his favorite nieces, nephews, cousins and friends. By the way, you were all his favorite. Cletus was preceded in death by his father, mother, daughter, Traci Rhea, sisters (Dee & Loveda) and brother, Glen. A Remembrance of Life Service will be held graveside Saturday March 21, 2020 at 2 o’clock CST, at Crump Cemetery, Crump TN. Family and friends will share their memories and celebrate the impact Cletus had on their lives. In lieu of flowers the family request donations be made in honor of Cletus to The Dwelling Place Church, 523 Urban Rd. Cleveland Tn., 37312. Jim Rush Funeral and Cremation Services North Ocoee St. Chapel has charge of the arrangements.

Cletus E. Turnbow, 78, went to meet his heavenly Father on March 17, 2020.Cletus was born in Angola, Indiana to Nathan and Mary Turnbow, their sixth child, on July 20, 1941. He was a Master Cosmetologist in the states of Indiana and Texas.... View Obituary & Service Information

The family of Cletus E. Turnbow created this Life Tributes page to make it easy to share your memories.

Send flowers to the Turnbow family.