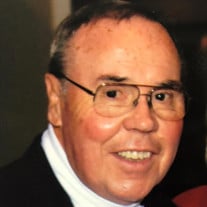 Local broadcast legend, Cordell “Corky” Whitlock, age 83 and long-term resident of Cleveland, walked to the Gates of Heaven Saturday, June 12th. Born in Smithville, Tennessee August 2, 1937, “Corky” was the beloved son of the late Reverend R.L. and Ola Whitlock. He was preceded in death by his seven siblings: Robert, Garlin, Thurman, Austin, Lytle, James and Dorothy Whitlock. Corky was a graduate of Dekalb County High School and earned his diploma in broadcasting from the Tennessee School of Broadcasting. He was known as the “The Voice of Bradley County Sports”, broadcasting over 12 thousand high school and college events. As a dedicated coach and incredible mentor, Corky led the Phillies for over 35 years and was honored with the Danny Jones Dixie Youth Lifetime Award. His enduring involvement and support of sports statewide yielded 2004 Best of Preps Guy Francis Memorial Award, this awarded to the person who goes the extra mile and was presented by Chattanooga Times-Free Press, Channel 3 News and the Chattanooga Quarterback Club. He also earned the TSSAA A.F. Bridges Award. Corky was inducted into the Bradley County Old Timers Hall of Fame, Bradley Central Girls Basketball Hall of Fame, Lee University Athletic Hall of Fame and the Greater Chattanooga Sports Hall of Fame. August 27, 2014 was celebrated in Cleveland as Corky Whitlock Day. The Tennessee State Senate Proclaimed August 19, 2014, Corky Whitlock Day. Corky is survived by his devoted wife of 63 years, Annette Courtney Whitlock, his children: Vicky Whitlock of Cleveland, Jackie Whitlock of Ooltewah, Kevin Whitlock and his wife Susie, and Keith Whitlock and his wife Margarita all of Cleveland, grandchildren: Courtney Whitlock Liles and her husband Cole, Chauncey Whitlock, Nicholas Whitlock, Jake Morris and Kimberleigh Morris, great grandchild Adrian Stapf, several nieces and nephews. Visitation will be held from 12:00pm to 2:00pm Tuesday, June 15, 2021 at Jim Rush Funeral and Cremation Services North Ocoee St. Chapel Cleveland TN. A Remembrance of Life Service will follow at 2:00pm with Dr. Bill Owens officiating. The interment will be held Thursday at 11:00am CST, at the Good Hope Cemetery in Baker Florida. Due to COVID concerns the family requests that COVID protocols be followed. In lieu of flowers the family requests donations be made in Corky’s memory to the Cleveland Greenway for a Memorial Bench. Donations may be made by following the instructions on the Parks and Recreation website clevelandtn.gov/665/Greenway. You can view the service via livestream by clicking on the link below. https://view.oneroomstreaming.com/authorise.php?k=1623787131120372

The family of Cordell "Corky" Whitlock created this Life Tributes page to make it easy to share your memories.

Send flowers to the Whitlock family.