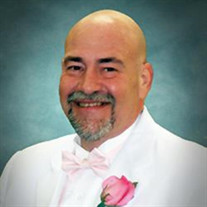 D. Myles "The Grand Rev." Howard, 64, a resident of Cleveland, passed away Monday, January 31, 2022 in a Chattanooga hospital. Myles was born in Cleveland and he was preceded in death by his father, Don Howard, maternal and paternal grandparents and several aunts and uncles. Myles retired from the Bradley County Sheriffs Department as a Sr. Lieutenant with over 30 years of service. He loved Bradley County but his heart was in the Charleston Community. Myles was well known in Southern Gospel Music and was inducted into the Southern Gospel Music Hall of Fame with the original Singing Americans whom he played the piano for. He was a Living Legend in the Tri State Gospel Music Association. He traveled, played piano and sang with numerous notable Southern Gospel Groups. He was known for helping countless individuals and groups get their start in Southern Gospel Music, never wanting any praise for his help. Myles was a loving husband, father and he absolutely loved being a grandfather. He was a member of the Solid Rock Baptist Church in Calhoun, Tennessee. Survivors include his wife of 40 years, Janie Howard of Cleveland, his daughter, Tiffiny Guardia (Jeff), Calhoun, son, Cliff Howard (Kassie), Cleveland, the apples of his eye his grandchildren, Sylas Guardia, Bella Howard, Addyson Howard, Reece Guardia, Carleigh Howard, "Jack Jack" Howard, mother, Mary Howard, Cleveland, sisters, Connie Howard, Hermitage, Tennessee, Tracey Howard, Murfreesboro, Tennessee, uncle, Gene Howard (Barbara), Cleveland, several nieces, nephews and cousins. The Remembrance of Life Service will be conducted on Saturday, February 5, 2022 at 2 P. M. at the Solid Rock Baptist Church in Calhoun with Reverend Dennis Cagle and Reverend Kenneth Gardner officiating. Interment will follow in the Council Baptist Church Cemetery with Daniel McAlister, Cody Thomas, Chris Oliver, Josh Stafford, Jon Stafford and Ricky Hale serving as active casket bearers. Honorary casket bearers will be everyone who traveled and sang with Myles. The family request in lieu of flowers, Memorials be made to the Charleston Elementary School Music Department, 8797 Hiwassee Street N. W. Charleston, Tennessee 37310. The family will receive friends from 4 until 9 P. M. Friday and from 10 A. M. until 2 P. M. Saturday at the Solid Rock Baptist Church. The Jim Rush Funeral and Cremation Services North Ocoee Chapel has charge of the arrangements. You may share your condolences and your memories with the Howard family by going to www.jimrushfuneralhomes.com.

D. Myles "The Grand Rev." Howard, 64, a resident of Cleveland, passed away Monday, January 31, 2022 in a Chattanooga hospital. Myles was born in Cleveland and he was preceded in death by his father, Don Howard, maternal and paternal grandparents... View Obituary & Service Information

The family of D. Myles "The Grand Rev." Howard created this Life Tributes page to make it easy to share your memories.