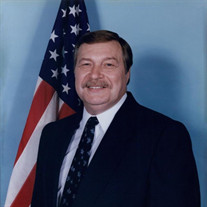 Danny Ray Chastain went home to be with the Lord on Tuesday, May 10th, 2022. He passed peacefully at home with his loving family by his side. Danny was a lifelong resident of Cleveland, Tennessee. He was a member of Southview Baptist Church. He was a member of the Cleveland Masonic Lodge. Danny also served his country in the United States Navy. Throughout his 75 years, Danny had an influence on countless lives. Many knew him through his law enforcement career that spanned 34 years. He began his career with the Bradley County Sheriff’s Office under Sheriff Lamar Lawson in 1974 until 1980. He then served the next 28 years with the Cleveland Police Department, where he retired in 2008. During the course of his career, he received numerous awards, accolades, and commendations. Part of what made him such a good officer was that he was a great man. He had a heart for others and a desire to be there for those in need. Danny was a devoted husband, and was married to his wife Brenda for 53 years. He loved his family fiercely. His wife, daughters, grandchildren and soon to be great grandchild were the light of his life. Danny was preceded in death by his parents Newton and Ruby Chastain, his brother Dewey Chastain, his son Mark Jason Chastain, and 2 grandsons Mason and Gaige Chambers. He leaves behind to cherish his memory his loving wife Brenda, daughters Trish (Trampas) Chambers and Denise (J.J.) Johnson, grandchildren Hailey Chambers and Hannah Chambers, Lucian (Sarah) Allison, Dani Allison, Riley Allison, and Jerry Johnson III, and soon to be great granddaughter Ellijay Allison. Also left behind to cherish his memory is his brother Harvey (Charlene) Chastain and his sister Zora Hooker, along with numerous nieces, nephews, aunts, uncles, and extended family. Danny had many close friends who will miss him greatly. There will be a Remembrance of Life Service on Friday, May 13th, 2022 at 3 pm at Jim Rush Funeral and Cremation Services Wildwood Avenue Chapel. Visitation will be from 12 pm – 3 pm prior to the service. Interment will be at Hillcrest Memorial Cemetery following the service. Reverend Ronnie Ledford and Pastor Rob works will be officiating. There will be a Masonic service prior to the remembrance of life. Service Detail will be provided by the Honor Guard from Bradley County Sheriff’s Office and the Cleveland Police Department, as well as members from the Cleveland Police Department serving as pallbearers. You can view the service by going to Danny’s obituary at jimrushfuneralhomes.com and click on the link below.

Danny Ray Chastain went home to be with the Lord on Tuesday, May 10th, 2022. He passed peacefully at home with his loving family by his side. Danny was a lifelong resident of Cleveland, Tennessee. He was a member of Southview Baptist Church.... View Obituary & Service Information

The family of Danny Ray Chastain created this Life Tributes page to make it easy to share your memories.

Danny Ray Chastain went home to be with the Lord on Tuesday,...

Send flowers to the Chastain family.