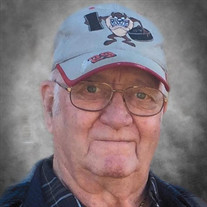 Daryl Spencer Norris, 81, passed away at Life Care Center of Cleveland on October 14, 2021 while surrounded by his family. Daryl was born and raised in Canton, NC. At the age of 17, he left home to join the National Guard and then the US Army. He was stationed at Fort Huachuca, Arizona and then returned home to Canton. He was then in the Army Reserves before being honorably discharged in 1963. He was part of a construction crew working on the Village Mall in Cleveland, TN in 1962 when he met his future wife of 59 years, Nancy Rhea (Pitts) Norris. They married in Cleveland on June 25, 1962 then moved back to Canton where their first two daughters were born. After the death of his beloved mother, Margaret Maxine (McKinnish) Norris, Daryl and Nancy moved their young family back to Cleveland. Daryl was a talented mechanic and went to work at various service stations around Cleveland forming long lasting friendships along the way. During this time, a third daughter joined the family. In 1972, he decided to go out on his own and opened Daryl’s Texaco on South Lee Highway. After the fuel shortages of that time, Daryl decided to close the station and went to work for Allied Bendix in 1976 where he remained until his 2002 retirement from Honeywell. Daryl loved his family dearly. He was so very proud of his three daughters, six grandchildren, and three great grandchildren. Poppy always made sure the candy bowl was full of chocolate when they stopped by for a visit. He also loved trucks, boats, and bass fishing. Many of his favorite memories and stories occurred on the Hiwassee and other rivers around Cleveland fishing with friends and family. We were often asked about the full-sized utility pole in our backyard at our house in Hope Acres that supported the Moonraker antenna for Daryl’s HAM radio. He was quite passionate about this hobby for many years. His handle was Fencepost and he greatly enjoyed talking with other CB radio operators around the world. Daryl was a lifetime Nascar fan and Dale Earnhardt was his favorite driver. He would be the first to tell you that no one ever came close to replacing Dale. Despite his disappointment in the changing sport, from restrictor plates to over commercialization, he would watch whatever race he could find on TV at the time. Daryl enjoyed watching other sports as well and remained a lifetime UNC fan, though he did change team favorites as his children and grandchildren moved through their lives, becoming a Chicago Cubs fan when his youngest daughter moved to Illinois and a recent Crimson Tide fan when his granddaughter began her studies there. Daryl loved music, especially traditional country. Often during family gatherings, we would play and sing along to country classics while he told us stories of the memories these songs brought to him. In his later years, Daryl loved watching the different wildlife in his yard, especially the hummingbirds. He kept bird feeders full and cut up fruit in the backyard so that he could sit on his carport watching the birds, squirrels, and rabbits that stopped by. In addition to his beloved mother, Daryl was proceeded in death by his older brother Retired Master Chief of the Navy Harold Kenneth Norris and an older brother that died in infancy, Mitchell Norris. Daryl is survived and will be forever missed by his younger brother, Larry Michael Norris of Lake Junaluska, NC, wife, Nancy Rhea (Pitts) Norris, his children Jeanette Fetter (Tom), Deneen Green, all of Cleveland, and Cheryl Heitz (Kevin) of Utica, IL, his six grandchildren Stephanie Sylvester (Brian), Alex Green (Rayven), Austin Green, Mackenzie Fetter, Annabelle Heitz, and Alyssa Heitz, and three great granddaughters Rosalie, Rylie, and Ronnie Green. The Remembrance of Life Graveside Service and Interment will be held Private for the family at Sunset Memorial Gardens. Casket Bearers will be sons-in-law Kevin Heitz and Tom Fetter, grandsons Alex and Austin Green, and close family friends Monty Davis, Jack Freeman, Ben Fetter and Brian Sylvester. Donations in Daryl’s honor are requested by the family to be made to the National Kidney Foundation by going to the website, www.kidney.org. The Jim Rush Funeral and Cremation Services North Ocoee Chapel has charge of the arrangements. You may share your condolences and your memories with the Norris family at www.jimrushfuneralhomes.com.

Daryl Spencer Norris, 81, passed away at Life Care Center of Cleveland on October 14, 2021 while surrounded by his family. Daryl was born and raised in Canton, NC. At the age of 17, he left home to join the National Guard and then the US Army.... View Obituary & Service Information

The family of Daryl Spencer Norris created this Life Tributes page to make it easy to share your memories.

Daryl Spencer Norris, 81, passed away at Life Care Center of...

Send flowers to the Norris family.