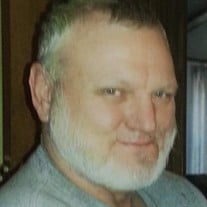 David Wayne Garren, 58, died unexpectedly in a farming accident on Saturday, November 13, 2021 while working in Armuchee, GA. Though he was born in Springfield, TN, David grew up in Soddy-Daisy where he set records playing football for Soddy-Daisy High School (class of 1981). He proudly served in the Army National Guard from 1984-1990. He later traveled the country and spent time living in several different states while driving articulated dump trucks with the Teamsters. After having grandchildren, David returned to school where he became a certified Non-Destructive Testing Technician and then finally made his home in Cleveland, TN in 2013. David was an avid outdoorsman and spent much of his free time camping, fishing or simply driving the trails and wooded backroads of Cherokee National Forest. His greatest joy was becoming a granddad to his five grandchildren: Ryan (13), Savannah (12), Audrey (9), Peyton (7), and Ansleigh (4). He loved taking them to the woods, to fish, to feed the ducks at the pond, building bonfires with them, and sharing his love and knowledge about nature, wildlife, and the weather. David was preceded in death by his beloved sister and brother-in-law, Sharon and Pat, and his cherished canine companion, Tazz. He is survived by his wife of 25 years, Paula, and three children: Erica (Rachel), Wesley (Amber), and Kayla. He also leaves behind his parents, Richard and Joanne, two sisters: Sherry (Arthur) and Sharlene (Jack), and two brothers: Darrell and Darrin (Kathy). The Remembrance of Life Service will be conducted on Tuesday, November 23, 2021 at 1 P. M. EST at Dogwood Baptist Church in Grandview, Tennessee 37337, with Brother Randall Dye officiating. Interment will follow in the Dogwood Baptist Church Cemetery with family and friends serving as casket bearers. The family will receive friends from 5 until 8 P. M. Monday at the Jim Rush Funeral and Cremation Services North Ocoee Chapel who has charge of the arrangements. You may share your condolences and your memories with David's family by going to www.jimrushfuneralhomes.com.

David Wayne Garren, 58, died unexpectedly in a farming accident on Saturday, November 13, 2021 while working in Armuchee, GA. Though he was born in Springfield, TN, David grew up in Soddy-Daisy where he set records playing football for Soddy-Daisy... View Obituary & Service Information

The family of David Wayne Garren created this Life Tributes page to make it easy to share your memories.

Send flowers to the Garren family.