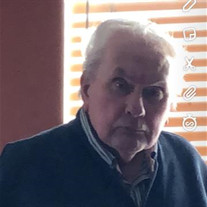 Donal “Don” Merrell a resident of Cleveland went to be with the Lord Tuesday morning December 3, 2019 at 3:33 a.m. Don was born August 9, 1939 to the late Noah and Mary Jane Merrell both residents of Fairview Mt. Community in Polk County. He was preceded in death by his son, Rodney Keith Merrell, also two brothers, J.C. and Kenneth Merrell. God blessed him with 80 years on this earth. He was saved in 1972 at 33 years of age at Four Point Baptist Church. He was a faithful and devoted member of Beacon Missionary Baptist Church. He was a member of Reliance Masonic Lodge #636. He was a past employee of Hardwick Stove and retired from Maytag after more than 35 years of service. Don leaves behind his loving wife of 50 years, Glenda Irene Merrell, 2 sons, Donald Withrow and Jeff Withrow, his daughter, Lori Merrell Plumley and her husband Randall his grandchildren, Barton Withrow and his wife Kara, Haylee Weber and her husband Chris, Justin Withrow, Tanner Withrow and his wife Marissa, Kaylan Withrow, Jacob Withrow, Josh Plumley and his wife Lacey, Caitlyn Plumley, Issac Plumley and Kaden “Gage” Plumley, great grandchildren Molly Kate and Ellan Withrow, Haydon, Baylee and Isabella Weber, Lily Withrow, Lailah Withrow and Ryker Withrow, Reagan and Adalynn Bowers, his sister, Lorraine Withrow, his brothers Bob Merrell and his wife Lee Merrell, Bee Merrell and his wife Pam Merrell, his sisters in law, Nellene Merrell, Rosie Merrell. He is also survived by numerous and wonderful nieces, nephews, great nieces and nephews. A Remembrance of Life Service will be held Saturday at 1pm at Beacon Baptist Church with Rev. Floyd Boggess officiating. The interment will follow at Sunset Memorial Gardens with Don’s grandsons serving as casket bearers. Honorary casket bearer will be Chris Weber. The family will receive friends Friday from 5 until 8pm at Jim Rush Funeral and Cremation Services Wildwood Ave. Chapel. We encourage you to share your memories and condolences with Don’s family by going to www.jimrushfuneralhomes.com.

Donal &#8220;Don&#8221; Merrell a resident of Cleveland went to be with the Lord Tuesday morning December 3, 2019 at 3:33 a.m. Don was born August 9, 1939 to the late Noah and Mary Jane Merrell both residents of Fairview Mt. Community in Polk... View Obituary & Service Information

The family of Donal "Don" Edward Merrell created this Life Tributes page to make it easy to share your memories.

Donal “Don” Merrell a resident of Cleveland went to be with the...

Send flowers to the Merrell family.