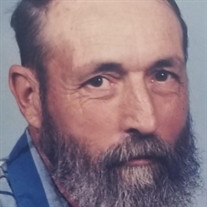 Donnie Black, age 77, a life long resident of Old Fort, Tennessee, passed away Saturday, March 28, 2020 at the family residence. Donnie was the son of the late Ester Mantooth Black and Jim Black. His sisters, Betty Jean Pullin and Annie Wilcoxon and his brothers, James and Bobby Black also preceded him in death. Donnie worked most of his life as a commercial painter. He loved the outdoors including hunting and fishing. He was known also for his wood carving. He enjoyed making walking sticks. Donnie was a member of the Ball Play Baptist Church in Polk County. Survivors include his wife of 36 years, JoAnn Black of Old Fort, his daughter, Josie Fields and her husband Denver of Benton, Tennessee, his sons, Harold Black and his wife Mickey of Cleveland, Robert Walters and his wife Christina of Old Fort, his grandchildren, Chrystal Callihan and her husband John, Gina Casias, Dakota Walters, Devin Walters, Jace Fields and Jalen Fields, his great grandson, Christopher Callihan, his sisters, Martha Trentham of Old Fort, Mary Parks of Eton, Georgia, his brothers, Holland Black, Verlin Black and his wife Ada all of Old Fort and several nieces and nephews also survive. Graveside Services and Interment will be held private for the family at Ball Play Baptist Church Cemetery with Pastor Matthew Harris and Pastor Charles Moore officiating. Denver Fields, Dakota Walters, Devin Walters, Robbie Walters, Arthur Trentham and Mac Wilcoxon will serve as casket bearers. The Remembrance of Life Memorial Service for family and friends will be conducted at a later time. The Jim Rush Funeral and Cremation Services Wildwood Chapel has charge of the arrangements. You may share your condolences and your memories with the Black family at www.jimrushfuneralhomes.com.

The family of Donnie Black created this Life Tributes page to make it easy to share your memories.

Send flowers to the Black family.