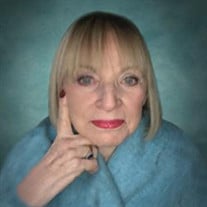 Elizabeth Susan Moss Sanchez, devoted wife and grandmother, friend, and lover of Jesus, passed away Thursday, March 5, 2020 after a rapid decline from Alzheimer's. Elizabeth was born April 3, 1935 in Montreal, Canada to John & Georgina Moss. She was preceded in death by her two brothers, John Moss and Kenny Moss. She is survived by her loving husband John Sanchez, her sister, Frances Moss Pownall (England) and brother, David Allan Davies (Quebec), John's sons: John Sanchez, Jr. & wife, Vivian, Tony Sanchez & wife, Michelle; grandchildren: Jessica Sanchez, Rachel Sanchez, John Michael Sanchez, and great-grandson, William Harrington, IV. Elizabeth was born and raised in Montreal, Canada. Elizabeth and John married in 1973 and enjoyed 46 wonderful years together. Elizabeth supported John faithfully throughout his military service. After John's retirement from the Army, they relocated to Cleveland, TN where they became rooted and established. Elizabeth worked more than 30 years for the Church of God International Offices in World Missions. Her deep love for the Lord and people she served was evident to all who knew her. Her laughter--contagious, her style--impeccable, Elizabeth is unforgettable. Elizabeth's devotion to John and John’s devotion to Elizabeth “’til death do us part” was evident throughout their 46 years together and was an example of unconditional, enduring love and commitment. The Remembrance of Life Service will be held Sunday, March 8, 2020 at 3:00 P. M. at Jim Rush Funeral and Cremation Services North Ocoee Chapel. Visitation will be from 1:00p-3:00p at the North Chapel. A private interment service will be held at the Chattanooga National Cemetery, Monday, March 9th for the family. In lieu of flowers, John requests donations be made to the Elizabeth Sanchez Memorial Fund; Church of God World Missions; P.O. Box 8016; Cleveland, TN 37320-8016. The Jim Rush Funeral and Cremation Services North Ocoee Chapel has charge of the arrangements. You may share your condolences and your memories with the Sanchez family at www.jimrushfuneralhomes.com.

The family of Elizabeth Susan Moss Sanchez created this Life Tributes page to make it easy to share your memories.

Send flowers to the Sanchez family.