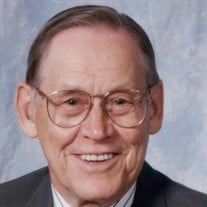 Eugene Van Deventer departed this life on April 18, 2020 at the family residence. He was born on March 8, 1924, in Dodge City, North Dakota, the second of six children born to Fred and Roszella (Westberg) Van Deventer. His father was a minister who traveled throughout South Dakota, North Dakota, and Wyoming, building churches. Eugene learned carpentry skills working with his father. The family settled in South Dakota in 1932, and Eugene graduated from Sturgis High School in Sturgis, South Dakota, in 1942. In 1945, he joined the United States Navy. He served aboard transport ships and was serving in the Philippines when the war ended. He married Lorraine Stephens in Mobridge, South Dakota, on June 12, 1949. Eugene worked as a produce manager for Safeway Foods in Spearfish, South Dakota, and a payroll accountant with Cudahy Foods in Denver, Colorado, while working toward a degree in accounting. In 1977, he purchased a business and moved to Shawnee, Kansas, where he lived until he retired and subsequently relocated to Cleveland, TN. Eugene was a member and deacon emeritus of the Peerless Road Church in Cleveland. Throughout his years in the Church of God of Prophecy, he served as a youth leader, Sunday school leader, local and state church treasurer, and as interim pastor, helping to organize a church in Leavenworth, Kansas. He always used his skills as a carpenter to help with church maintenance and improvements. He was preceded in death by his parents, his brother Elmer Ellsworth Van Deventer, and sister Estelle Wessel. He is survived by his wife of 70 years, Lorraine Van Deventer, and his daughter, Johna Van Deventer, both of Cleveland. He is also survived by his brothers Virgil Van Deventer of Parker, Colorado, Vernon (Jane) Van Deventer of Cleveland, and sister Yvonne (Donald) Bowen of Mountain Home, Idaho, and by 11 nieces and nephews. He will be buried at the National Cemetery in Chattanooga. A celebration service to honor his life is being planned for a later date. The family requests that in lieu of flowers, memorials be sent to the Peerless Road Church, 1200 Davis Drive, Cleveland, TN 37312. Memorials will go toward the church’s Capital Campaign. The Jim Rush Funeral and Cremation Services North Ocoee Chapel has charge of the arrangements. You may share your condolences and your memories with the VanDeventer family at www.jimrushfuneralhomes.com.

Eugene Van Deventer departed this life on April 18, 2020 at the family residence. He was born on March 8, 1924, in Dodge City, North Dakota, the second of six children born to Fred and Roszella (Westberg) Van Deventer. His father was a minister... View Obituary & Service Information

The family of Eugene "Gene" Van Deventer created this Life Tributes page to make it easy to share your memories.