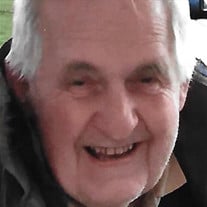 Francis "Frenchie Taylor Harris, age 81, a resident of Cleveland, passed away Wednesday, November 13, 2019 in a local health care facility. Frenchie, as he was affectionately called, was born in Waynesboro, Virginia and he was the son of the late Ruby Arlene Carey Harris and Rudolph Marshal Harris Sr. His wife, Barbara Kemper Harris and his companion, Patricia Steele also preceded him in death. Frenchie worked in sales and marketing most of his life. He worked for Thiokel Chemical in Waynesboro, Virginia and Turtle Plastics in Millersville, Maryland. He was known for his creativity and he was a gifted craftsman. He was always inventing and received patents on many of his projects. He had an infectious sense of humor and he was know as a forgiving and loving person. Frenchie was a Methodist. Survivors include his brothers, Marshal Harris and his wife Judy of Huddleston, Virginia, Ron Harris and his wife Loretta of Dalton, Georgia, his nieces, Angela Dawn Harris of Atlanta, Georgia, Shana H. Masengill and her husband Rob of Knoxville, his great nieces, Anna Paxton Masengill, Alexis Grace Masengill and Reagan Karr Masengill, his nephew, John Michael Berg of Waynesboro, Virginia, his special friends, Billy and Sandy Luke, Taylor and Emma Draper, Savannah Redmer all of Cleveland and Theresa and James Bronakoski of Millersville, Maryland also survive. The Remembrance of Life Service and Interment will be conducted at a later time in Waynesboro, Virginia. The family would like to say a special thank you to Bradley Health care and Rehab for their excellent care and love they gave Frenchie. The Jim Rush Funeral and Cremation Services North Ocoee Chapel has charge of the arrangements. You may share your condolences and your memories with the Harris family at www.jimrushfuneralhomes.com.

Francis "Frenchie Taylor Harris, age 81, a resident of Cleveland, passed away Wednesday, November 13, 2019 in a local health care facility. Frenchie, as he was affectionately called, was born in Waynesboro, Virginia and he was the son of the... View Obituary & Service Information

The family of Francis "Frenchie" Taylor Harris created this Life Tributes page to make it easy to share your memories.

Send flowers to the Harris family.