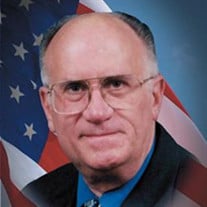 Frank Ronald Shroyer (CMSgt USAF retired), 80, of Cleveland, Tennessee, passed from this life to his heavenly reward on April 3rd, 2021. Frank was born in Campbell County, Gillette, Wyoming , on April 21st, 1940. He graduated from Greybull High School in Greybull Wyoming in 1959, received an Associate Degree from the USAF Community College, and a Bachelor’s Degree from Wayland Baptist University. Frank was married to Glenda Gay Sutherland on November 7th, 1964. Frank enlisted into the US Air Force in 1961 during the Vietnam War. Following military training, he was assigned to Anchorage, Alaska. Frank was then stationed at Waco, Texas, and later was sent to Vietnam for a tour of duty. He returned to serve in Colorado Springs, Colorado, and then to work in Washington D.C. at the Pentagon. His next assignment was in Montgomery, Alabama, and then to Pensacola, Florida. In 1974, he was given an assignment in Omaha, Nebraska, and then transitioned to Wichita Falls, Texas, to work as an instructor at the military training center. He later was stationed in Cheyenne, Wyoming where was selected and graduated as one of only two USAF enlisted member from the US Army Sergeant Major Academy in Texas. Frank was then assigned to serve in Stuttgart, Germany, with EUCOM Headquarters at Patch Barracks. His last assignment in Europe was in Frankfurt, Germany. He retired from the United States Air Force with the highest enlisted career rank as (E-9), Chief Master Sergeant serving as Senior Enlisted Advisor at the US Space Command Headquarters, in Colorado Springs, Colorado at NORAD after 28 years of active military service. After retiring, his family moved to Cleveland, Tennessee, which has remained their home. Frank worked at Cleveland State Community College graduation officer for five years. He then served at Lee University as the Squires Library Circulation Manager for 20 years. He loved the Gideon’s International and served multiple terms as local Chapter President of the Cleveland North Camp. Frank accepted Jesus Christ as his Savior at a very young age and, as a young boy, joined the Church of God of Prophecy, where he served as a Deacon since 1971. He was on multiple church boards and committees and served in various state, national and international appointments. He was a current member and Deacon at the Peerless Road Church of God of Prophecy in Cleveland, Tennessee. Frank grew up in a family that loved singing and making music together. He was a part of several singing groups and loved singing baritone in sanctuary choirs. He loved playing guitar. He was preceded in death by his father, Orlies Fletcher Shroyer, mother, Caroline Ester (Knittle), and sister Eldora Faye North. Frank is survived by his childhood sweetheart and wife, Glenda; son, Gwen Nevelle Shroyer (wife, Debbie and grandchildren Cody Glenn (wife Haydin and great-grandchildren Elliot Rose and Parker Glenn), Katherine and Chloe), Tony Curtis (wife Sherri and grandchildren Asher Cole and Anna Grace), Eric Shannon Sutherland (wife Joanna), Kevin Neal Shroyer (grandchildren Keaton Edward, Austin Maxwell, Julia Marie, and Brynn Victoria), and Stephanie Dawn McKinley (husband Shaun, grandchildren Reagan Caroline, Madison Ormie, and Kennedy Ruth), his brothers Earle Shroyer (wife, Pat), Dennis (wife, Sherry), and Gary (wife, Diane) and sisters, Vonda Johnson (husband, Sigurd), and Jessie Vee Cordeau (husband Eugene) and several nieces, nephews, cousins and close friends. The Remembrance of Life Service will be conducted on Monday, April 12, 2021 at 10:00 A. M. at the Peerless Road Church with Pastor Adam Jones officiating. Graveside service will take place at the National Cemetery in Chattanooga, Tennessee, at 1:00 PM on Monday with full military honors. Honorary Pall Bearers are David Calfee, Carl Corser, Noe Estrada Jr., Ron Hamm, Perry Horner, Jerry Howard, Roger Kennard, Thomas Pavlou, Michael Plumley, Renee Rodriguez, Vernon Van Deventer, Glen Ward, Jack Wilkinson, Norm Wojcik, Ronald Wright, and Henry Wyatt. The family will receive friends from 4:30 until 7:30 P. M. on Sunday at the Peerless Road Church. The Jim Rush Funeral and Cremation Services North Ocoee Chapel who has charge of the arrangements. You may share your condolences and your memories with the Shroyer family at www.jimrushfuneralhomes.com.

The family of Frank Ronald Shroyer created this Life Tributes page to make it easy to share your memories.

Send flowers to the Shroyer family.