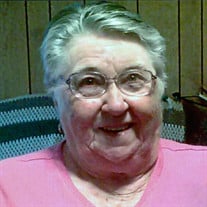 Grace Marcum Baird, 89, (formerly of Scott County, TN) passed away peacefully with her family by her side on Sunday, June 7, 2020. She was preceded in death by her parents, Lori Marcum and Ida Mae Reed Marcum; her husband, Carl Baird; and great-grandson Jaxon Kidd. She was also preceded in death by her brothers Clifford, Homer and Ralph Marcum her sisters Bertha Adkins, Thelma Stanley, Edna Ford, Ruth Owens, and Nadine Meredith. She leaves to cherish her memories four children: Roger & wife Judy Baird of Foster, KY; James & wife, Linda Baird of Cleveland, TN; Paul & wife Sherry Baird of Arlington, TN; Sandra & husband Ronald Kidd of Georgetown, TN. Eleven grandchildren: Rebecca & husband Tim Bishop of Brookeville, KY; Melissa Bishop of Paris, KY; Donna & husband Bill Feltner; Dwayne Baird; and Miranda Baird all of Foster KY; Stephanie Baird Ellerman & husband Joe of Greenville, TN; James II & wife Elecia of Cleveland, TN; Connie & husband Brad DeCrow; and Paula & husband Nathan DeCrow both of Bartlett, TN; Johnny Kidd & wife Kylie; and Joe Kidd & wife Heather both of Georgetown, TN; fifteen great-grandchildren and two great-great-grandchildren. Grace was affectionately called "Mamaw" not only by her grandchildren but by other family members, co-workers, and friends. Her family was the center of her life. She loved all people that she met. She seemed to be the caregiver for all around her and was happy to do so. Grace retired from Magic Chef/Maytag after 20 years of service. But she had a very long work history that included working in a hospital in Lafollette, TN, that she enjoyed very much especially the nursery; she was a seamstress at Levi Strauss making jeans in Knoxville; and she worked at a tent factory in Lafollette. Her work years there was during the Vietnam War. The most unusal thing about this occupation was that she, and her husband, working alongside her, helped to make the tents for the military hospitals during the year that her eldest son, Roger, served in the war - a very difficult time in their life. There were many of her life stories that were so touching. After retirement, for several years, she traveled with the seniors covering 46, if not 48, of the continental United States. She enjoyed that very much. She loved gardening (especially flowers), quilting, embroidering, crocheting, and cooking. Everyone who came....had to eat! She was loved and surely is going to be missed. A Remembrance of Life Service will be held graveside 2o’clock Friday June 12, 2020 at Campbell Memorial Gardens in Jacksboro Tn., with Rev. Ray Cheatham officiating. The family will receive friends Thursday from 5 until 8pm at Jim Rush Funeral and Cremation Services North Ocoee St. Chapel.

Grace Marcum Baird, 89, (formerly of Scott County, TN) passed away peacefully with her family by her side on Sunday, June 7, 2020. She was preceded in death by her parents, Lori Marcum and Ida Mae Reed Marcum; her husband, Carl Baird; and great-grandson... View Obituary & Service Information

The family of Grace Marcum Baird created this Life Tributes page to make it easy to share your memories.

Send flowers to the Baird family.