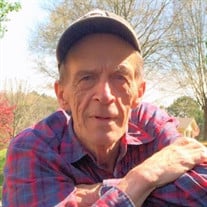 Herman Henry Farmer, age 76, a resident of McDonald, passed away on January 28, 2021 at his home surrounded by his loved ones. He was born on June 5, 1944 in the Georgetown, TN to Almer E.“Pap” and Dovie (Stevison) Farmer. Herman had worked for 24 years at Brown Stove Works and later worked for 10 years, when he retired from the Flowers Bakery Company in 2004. He was of the Baptist faith. In addition to his parents, he was preceded in death by his brothers, John Ellis Farmer, Johnny P. Farmer, Robert D. Farmer and sister, Kate Farmer. He is survived by his daughters Tammy Farmer White (Isaac Dyer) and Tracie Beavers, his son, David Farmer all of Cleveland, his four brothers, Charles Farmer, Don Farmer and wife Sheila all of Cleveland; Jimmy E. Farmer and wife Elouise, James Farmer all of Georgetown, TN; and four sisters, Shirley Long and husband Kenneth, Louise Balde, Dean Pendergrass all of Cleveland and Evelene Benson of Georgetown, TN; granddaughters Mikayla Seana-Gail White (Justin Halberg) of North, VA, Amber Brock, Ashley Ratcliff both of Cleveland; and grandsons Jonathan White of IN, Garrick White (Cathy) of IN, Brandin Fain of Cleveland, great-grandsons Henry Halberg of North, VA, and Knox White of IN; great-granddaughter Evelyn White of IN; and several cousins, nieces and nephews. A celebration of his life will be conducted at 4 p.m. on Sunday, January 31, 2021 in the at Jim Rush Funeral and Cremation Services North Ocoee Chapel with the Reverend Kenneth Gardner officiating. Graveside Services will be conducted at a later time in Johnston Cemetery in Meigs County. The family will receive friends from 2 p.m. to 4 p.m. on Sunday, January 31 prior to the service at the Jim Rush Funeral and Cremation services North Ocoee Chapel who has charge of the arrangements. Herman’s family would like to extend a special thanks to the wonderful staff from Hospice of Chattanooga nurses Melissa, Jessica and Marisa, along with social worker Farrah and the Hospice Chaplain, Doug Murray for their tireless hours of care and friendship. Also, a special thanks to years of friendship and extended help from his neighbors Anthony and Doris Price, Jerry Barnes, and family friend Kimberly McMillian, whom he’d thought of as a daughter. You may share your condolences and your memories with the Farmer family at www.jimrushfuneralhomes.com.

The family of Herman Henry Farmer created this Life Tributes page to make it easy to share your memories.

Herman Henry Farmer, age 76, a resident of McDonald, passed away...

Send flowers to the Farmer family.