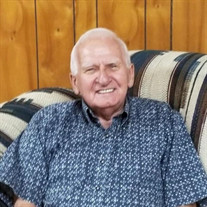 I.M. Beard, age 83, of Cleveland passed away Tuesday March 31, 2020 at his home. I.M. was born March 18, 1937. He served in the United States Army from 1955-1958 and was deployed to Korea as part of the Korean Conflict as a Combat Engineer. After his service, he worked at Magic Chef where he worked there for more than 30 years where he spent much of his time in supervision. He also met and married the love of his life, Faye Chastain, upon his return from service. He and Faye were married for over 60 years and had three children; Jesse, Penny, and Buffy. I.M. loved doing anything that allowed him to work with his hands. He was also a man who loved his time outdoors. He spent countless hours walking the hills and woods and hiking the local mountains and even a large section of Appalachian Trail. He had a passion for flying, loved getting to Cade’s Cove as often as he could, and never turned down a chance to eat ice cream. He was a man of the Lord and loved his Boanerges Baptist Church family dearly. I.M. is preceded in death by his father and mother, French and Gladys Beard. He is also proceeded by his daughter Kimberly Buffy and his sisters Veta Green, Pearney Gates, Alma Beard, Wanda Cross, and Beatrice Messer and brothers Andrew Beard, Homer Beard, and Hoover Beard, all of Cleveland. He is survived by his wife Faye Chastain Beard, daughter Penny Stephens, and son Jesse (Kelley) Beard and his grandchildren Derrick Stephens, Josh (Amber) Stephens, Kacy (Rachel) Boyd, Brandi Beard, and Jordan Beard. He is also survived by great-grandchildren Cameron Stephens, Jamie Stephens, and six others. He is survived by sisters Monita Chastain, Chessie Norman, and Vickie Prince and brothers Doyle (Joyce) Beard and Charles (Shirley) Beard. The family will have a private graveside service with military honors Friday at Boanerges Baptist Church Cemetery with Pastor David Disney officiating along with family serving as casket bearers. Jim Rush Funeral and Cremation Services Wildwood Ave. Chapel has charge of the arrangements.

The family of I.M. Beard created this Life Tributes page to make it easy to share your memories.

Send flowers to the Beard family.