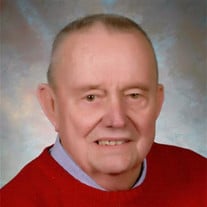 James Burke Chase, 84, died Wednesday, July 3, 2019 at home surrounded by his family. He leaves his wife of 65 years, Dorothy Nell (Bryant) Chase; his daughter, Janice Rice and two sons; Joe Chase of Cleveland and Jeff Chase of San Jose, California along with his six grand children and five great grandchildren. His sister Jenny Kate Smith and her family in Chattanooga. Born and raised in Cleveland, the son of Millard and Eloise (Fitzgerald) Chase, he was a lifelong resident of Bradley County. He met his wife, Dorothy Nell Bryant while she was working at the Cleveland Glass Company and they got married on August 27, 1954. In his early years, was part of the Bradley High School Football team and went off to Tennessee Tech College to two years. Established an electrical wholesale business – Ocoee Electric Supply where he served the community for several years and then sold to Quinn Electric. Over his many years working in Cleveland, Burke worked at the Sports Center selling motorcycles also in the car business at Benton Pontiac and Buick Dealership. He was manager of the Star View Drive Inn theater and Cinema Plex, managed Shoney’s Restaurant on Keith street. His last job was working for his son, Joe Chase at Bryant Sign & Graphics company where he was the office manager. Burke was a volunteer fireman for many years until Cleveland could support a full-time fire department. He spent many years supporting the community fighting fires and saving lives. He was a member of the Cleveland Country Club during his business years and was an avid golfer. He was an active lifetime member of the local ELKS lodge #1944 and held different levels of leadership over his many years. He also loved to play cards, hunt and fish with all his friends and relatives. The family would like to express their appreciation to Marsha and Ben at Encompass Home Healthcare for their professional and compassionate care and Hospice of Chattanooga for their support. The family will receive friends from 11:00am to 1:00pm on Monday at the Jim Rush Funeral and Cremation Services North Ocoee St. Chapel prior to a private graveside service. In lieu of flowers, Burke would like you to buy your grandkids a fishing pole and take them fishing!

The family of James Burke Chase created this Life Tributes page to make it easy to share your memories.

Send flowers to the Chase family.