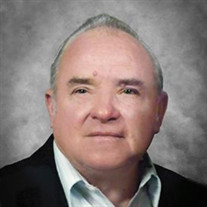 James Robert Dye, age 93, a resident of Cleveland, passed away Thursday, September 9, 2021 at the family residence. Mr. Dye was born in Etowah, Tennessee and he was the son of the late Annie Johnson Dye and Earl W. Dye. His first wife, Mayble... View Obituary & Service Information

The family of James Robert Dye created this Life Tributes page to make it easy to share your memories.

James Robert Dye, age 93, a resident of Cleveland, passed away...

Send flowers to the Dye family.