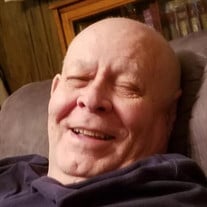 James "Jim or J. R." Roger Roberts, age 71, a resident of Cleveland, passed away Friday, April 2, 2021 in a Chattanooga hospital. Jim was born in Maryland and he was preceded in death by his mother, Katherine Roberts Brown, his maternal grandparents, John W. and Lonnie Roberts, his sister, Brenda Brown and his brother, Paul Junior Brown. Jim was a U. S. Air Force Veteran, serving during Vietnam. He served for many years in Quality Control with several companies including, Dana Corporation, Dr. Scholls and Volkswagen. In his younger years, he was a talented singer, singing in a quartet called the "G.T.O's". Jim was an avid University of Tennessee sports fan. He enjoyed working in his vegetable and flower gardens where he was known for growing herbs, corn and day lilies. He was known for his sense of humor and his servants heart. He often would volunteer his time at the Caring Place. Jim was a proud member of the Church of God of Prophecy and he was a member of the Peerless Road Church. Survivors include his wife, Cindy McLain Roberts of Cleveland, his sons, Sgt. James McLain "Mac" Roberts and his wife Dr. Alle Lie of Ontario, California, Ben Roberts and his wife Jennifer Lynn Roberts of Chattanooga, his grandchildren, Samuel and Michael Roberts, his sisters, Barbara Brown Canard and Grace Brown Perrell both of North Carolina, his brothers, George Brown of South Carolina and John Brown of North Carolina, his aunt, Shirley Roberts Martin of Virginia and several nieces and nephews also survive. The Remembrance of Life Service will be conducted on Thursday, April 8, 2021 at 1:00 P. M. at the Peerless Road Church with Pastor Adam Jones and Bishop Randy Howard officiating. Graveside Services and Interment will be conducted on Friday at 11:00 A. M. at the Chattanooga National Cemetery with Chris Strain, Dr. Randy Howard, Thomas Pavlou, Keith Campbell, Dylan Goins and John Brown serving as casket bearers. Honorary casket bearers will be Dr. Michael Plumley, Henry Wyatt, Dwight Richardson, William Haines and Rusty Cooke. Military honors will be given. The family will receive friends from 11:00 until 1:00 on Thursday at the Peerless Road Church. The Jim Rush Funeral and Cremation Services North Ocoee Chapel has charge of the arrangements. You may share your condolences and your memories with the Roberts family at www.jimrushfuneralhomes.com.

James "Jim or J. R." Roger Roberts, age 71, a resident of Cleveland, passed away Friday, April 2, 2021 in a Chattanooga hospital. Jim was born in Maryland and he was preceded in death by his mother, Katherine Roberts Brown, his maternal grandparents,... View Obituary & Service Information

The family of James "Jim or J. R." Roger Roberts created this Life Tributes page to make it easy to share your memories.

Send flowers to the Roberts family.