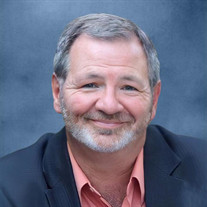 Mr. Jeffery "Jeff" Lewis, age 58, of Thomaston, died Saturday, April 23, 2022, at Upson Regional Medical Center. Mr. Lewis was born on November 10, 1963, in Monroe, Michigan, to the late George J. Lewis, and Cecilia Combs Lewis. Jeff was passionate about ministry and was associate pastor and then pastor of Holy Ground worship center which later became Crossroads Community Church. which later merged with Christ Chapel, and he was deeply involved there in the media ministry, choir, teaching Bible study, and leading a golf group. He also occasionally played drums or bass. He was very well known and respected in Thomaston as a gifted director and performer in musical theater, and was an avid golfer. He was a supplier quality engineer at Kia Motors Manufacturing in Georgia and then at Volkswagen in Chattanooga. We were in the process of transitioning to Cleveland, and he was so excited about being close to his family. His passion in recent months was as a bass singer in the Sound of Tennessee Barbershop Chorus. He was well known for always having a positive attitude and lifting up everyone he came in contact with. He was very friendly and never met a stranger. Honesty and integrity were of at most important to him, and he was very well-known as a man of integrity and honor, and was extremely organized. He’s probably best known as modeling how to be an excellent husband, father, and poppy. He is preceded in death by his father. Survivors include his mother, Cecilia Lewis of Cleveland, TN, wife, Shari Seymour Lewis of Thomaston, daughters, Jenna (Matt) Harness of Maryville, TN, Larissa Brown of Cleveland, TN, Natalie (Jacob) Fields of Jacksonville, FL, sons, Jacob (Christina) Lewis of Signal Mountain, TN, Bryan (Ann) Rosales of Freemont, California, Stephen (Beth) Rosales, of Columbus, Ohio, brothers, Scott (Darla) Lewis of Cleveland, TN, Darrin (Raul) Lewis of Atlanta, sister, Nicole Johnson of Thomaston, grandchildren, Parker, Chris, Aubree, Drake, Lilliana, Isaac, Holden, Scarlett, Joseph and one on the way. Funeral services in Thomaston will be held on Tuesday, April 26, 2022, at 5:00 p.m. from the Chapel of Coggins Funeral Home, 321 Hannahs Mill Road, Thomaston, Georgia 30286. The family will receive friends on Tuesday, April 26, 2022, from 3:00 p.m.- 5:00 p.m. at Coggins Funeral Home. In lieu of flowers, memorial donations can be made to TUAC at 201 S Center St. Thomaston, GA 30286. Funeral Services in Cleveland will be conducted on Wednesday, April 27, 2022 at 5 P. M. at the Grace Community Church of God, 4745 Mouse Creek Road N. W. Cleveland, Tennessee 37312. Officiating will be Pastor Kevin Mendel and Pastor Gary Sears. Interment will follow in the Hilcrest Memorial Gardens with family and friends serving as casket bearers. The family will receive friends from 2 until 5 P. M. Wednesday at the Grace Community Church of God. The Jim Rush Funeral and Cremation Services North Ocoee Chapel has charge of the Cleveland arrangements. You may share your condolences and your memories with the Lewis family at www.jimrushfuneralhomes.com. To watch the service by live stream click this link: https://youtu.be/2xFRmJ6Taos

The family of Jeffery "Jeff" Lewis created this Life Tributes page to make it easy to share your memories.

Send flowers to the Lewis family.