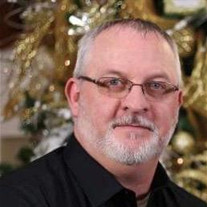 It is with great sadness that the family of Joel Mark Towe announces his passing after a heart attack on Thursday, January 23, 2020, at the age of 49 years. Joel was born May 20, 1970 in Cincinnati, Ohio as the 11th child to Nathan Bloss and Helen Marie Towe. He attended Lee University, where he played for the Lee Flames Basketball team. He graduated in December 1994 with a Bachelor of Business Education Degree. Joel coached high school JV and Varsity Basketball for both the boys’ and girls’ teams at Atlantic Shores Christian School in Chesapeake, VA for 8 years before moving to Cleveland, TN. He was currently employed by Cleveland Ford as the Warranty Administrator. Joel gave his life to Jesus at the age of 8 years and spent his life serving Jesus, others, and the local church. He was an ordained minister with His Song Ministries Fellowship under Pastors Jamie and Judy Jacobs Tuttle. Joel served at Cornerstone Church of God in Norfolk, VA as a drummer, worship leader, and youth leader. After moving to Cleveland, TN in 2005, Joel served Blue Springs Church of God as youth pastor and Associate Pastor. In 2012, Joel and his family became members of Dwelling Place Church where he served as youth leader for several years before serving as Usher and Altar Director as well as the Men’s Ministry Director. Joel loved all things sports related and was an avid Dallas Cowboys fan. He loved spending time with friends and family, and you could often find him on the pickle ball court or shooting range. He loved gathering with friends over a meal and could always be counted on to crack a joke and fill the room with laughter. All who knew him loved his witty commentaries. Joel was also always ready with words of encouragement and wisdom and many looked up to him as a rock to lean on. Joel loved deep and he never knew a stranger. Joel will be lovingly remembered and greatly missed by his wife of 26 years, Wendy Towe, and his children: Emily (Wes) Black, Hannah (Day) Currie, and Jessica Towe, as well as his first grandbaby that is due in March. Also missing Joel will be his mother Helen Marie Towe, and his siblings: Iva (Stan) Wells, Jeannie (Bruce) Cupp, Peggy (Robert) Hitte, Connie (Tom) Schmidt, Madeline (Greg) Hopkins, Nathan Jr. (Kim) Towe, Natalie Ashby, Gregory (Sarah) Towe, and Phillip (Rebecca) Towe. Joel was proceeded in death by his father, Rev. Nathan Bloss Towe; sister, Robin Marie Hurst; brother, Jeffrey Tim Towe; and brother-in-law, Rev. James R. Ashby. The family will receive friends at Dwelling Place Church, 523 Urbane Road, Cleveland, TN, on Monday, January 27, from 6 until 8pm and Tuesday from 10 until 11am. A Remembrance of Life Service will be held to celebrate Joel’s life at Dwelling Place Church on Tuesday, January 28, at 11am. Pastor Jamie Tuttle will be officiating along with Pastor Casey Doss. Pall Bearers will be Jon Jewitt, Danny Wages, Rob Daigle, Aaron Wilson, Jacen Phillips, and Tony Moore. The family requests that donations be made in Joel’s memory to Dwelling Place Church, 523 Urbane Road, Cleveland Tn., 37312. Jim Rush Funeral and Cremation Services North Ocoee St. Chapel has charge of the arrangements.

It is with great sadness that the family of Joel Mark Towe announces his passing after a heart attack on Thursday, January 23, 2020, at the age of 49 years. Joel was born May 20, 1970 in Cincinnati, Ohio as the 11th child to Nathan Bloss and... View Obituary & Service Information

The family of Joel Mark Towe created this Life Tributes page to make it easy to share your memories.

It is with great sadness that the family of Joel Mark Towe announces...

Send flowers to the Towe family.