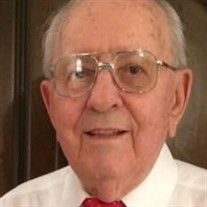 John Edward Black, 89, went to be with his Savior Tuesday, December 10, 2019, He was currently residing in Cleveland, Tennessee. Visitation with the family will be at 9:00 a.m. Saturday, December 14, 2019 at Absher- Nicholson Funeral Home in Carrier Mills, Illinois. The celebration of John’s life will follow at 11:00 a.m., also at the funeral home. The service will be officiated by Rev. Lynn Hancock, Pastor of Briarwood Church in Pampa, Texas; Bishop Mike Smith, Executive Pastor at Eastside Praise in Louisville, Kentucky; and Pastor Phillip Looney, Minister of Visitation and Inter-Generations at Westmore Church of God in Cleveland, Tennessee. John was born May 21, 1930 in Stonefort, Illinois to George W. and Blanche Irene Murrow Black. John met the love of his life, Nellie Mae Tanner, in the 8th grade when they both attended school in Carrier Mills. They were married December 19, 1948 during Christmas vacation of their senior year in high school. In May, 1949 John graduated from Carrier Mills High School. He attended college obtaining his bachelor’s degree and completed numerous graduate level classes, as well. John has written “I knew my entire life that I would become a minister.” He goes on to write, “I accepted the Lord Jesus Christ as my Savior in March, 1943. I joined the church immediately.” “The church” he was referring to is his beloved Church of God. He became a licensed minister in the church at the age of 21, and was ordained March 21, 1960. He preached 6,401 sermons and saw over 2,000 lost people surrender their lives to Jesus under his ministry. He served churches in Illinois, Kentucky, Ohio, and as State Overseer of the Churches of God in Arizona. John invested much of his time in state and national leadership assignments. After retirement, John chose to be a member of Eastside Praise Church of God. Nothing brought more joy and laughter to John Black than his family. He was the perfect example of our Heavenly Father—unconditional, never-ending love, giving, merciful, strong, and forgiving. He mourned and prayed with his family when they faced life’s challenges; and, he was the first to celebrate, and even take pride in the successes of all of his family members. Survivors include his wife of nearly 71 years, Nellie Mae Tanner Black; his four children, Janet Black Hancock (Lynn) of Pampa, Texas; John Stephen Black (Polly) of Cleveland, Tennessee; Patsy Diane Black of Louisville, Kentucky; Lisa Black Patton (Buddy) of Gilbert, Arizona; seven grandchildren, Jamisen Hancock (Brooke) of Canyon, Texas; Lynnsee Green (Matt) of Pampa, Texas; Jansen Hancock (Abby) of Pampa, Texas; John Tyler (Brittany) of Augusta, Georgia; Abby Black Stilwell (Matt) of Lexington, South Carolina; Jacquelynn Stone Ingle (Chris) of Ooltewah, Tennessee; Stephanie Stone Sheets (Lonnie) of Georgetown, Kentucky; and 12 great grandchildren. His siblings include Paul Black (Dena), Barbara Black Hammonds (Lee), Dave Black (Judy), Nina Black Gibbons (Gene), Phyllis Black Ferrell (Chuck); and Sam Black; his sister-in law Mabel Murrow Clements; and many precious nieces and nephews. He was preceded in death by his parents; twin daughters, Linda and Glinda; and sister, Lola Black Parton Wold. John Black was truly a Christian gentleman, godly husband, brother, father, and granddad who will be greatly missed! In lieu of flowers the family is asking memorials be made to Lee University in Cleveland, Tennessee: www.leeuniversity.edu/give. The Jim Rush Funeral and Cremation Services North Ocoee Chapel has charge of local arrangements. You may share your condolences and your memories with the Black family at www.jimrushfuneralhomes.com.

John Edward Black, 89, went to be with his Savior Tuesday, December 10, 2019, He was currently residing in Cleveland, Tennessee. Visitation with the family will be at 9:00 a.m. Saturday, December 14, 2019 at Absher- Nicholson Funeral Home... View Obituary & Service Information

The family of John Edward Black created this Life Tributes page to make it easy to share your memories.

John Edward Black, 89, went to be with his Savior Tuesday, December...

Send flowers to the Black family.