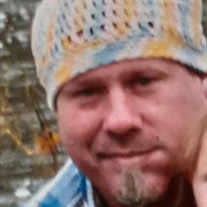 John William Rosenberger Jr., age 47, a resident of Cleveland, passed away Sunday, March 22, 2020 at the family residence. His father, John William Rosenberger Sr., his maternal grandparents, Lewis and Betty Stokes and his paternal grandparents, Leroy and Laura Rosenberger also preceded him in death. John Jr. worked for Peyton's for more than 12 years. He loved the outdoors including fishing, swimming and camping. He also loved Remote Control Cars. John Jr. loved building Hot Rod cars and was known for being a good car mechanic. Most of all he loved being a father and grandfather. John Jr. attended the Baptist Church. Survivors include his sons, Cody Rosenberger and John Leroy Rosenberger both of Cleveland, his grandchildren, Lauren, John Lucas and Nevaeh Rosenberger, his mother, Teresa Rosenberger and her companion Haskel W. Morrow of Cleveland, his sister, Laura Rosenberger Ralston and her husband Greg of Ellijay, Georgia, his half sister, Amy Rosenberger of Jacksonville, North Carolina, his half brother, John W. Rosenberger Jr. of California, his uncle, Moose Blevins of Cleveland and his 7 nephews, his 1 niece and several cousins also survive. There will be no services for the family at this time. The Jim Rush Funeral and Cremation Services North Ocoee Chapel has charge of the arrangements. You may share your condolences and your memories with the Rosenberger family at www.jimrushfuneralhomes.com.

The family of John William Rosenberger Jr. created this Life Tributes page to make it easy to share your memories.

Send flowers to the Rosenberger family.