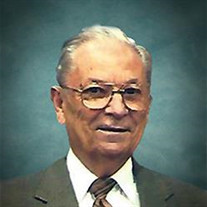 Joshua (Josh) Thomas went to be with the Lord on October 27, 2019. He was born in Crisfield, Maryland on February 2, 1927. He joined the Army in 1945 and took his basic training in Fort Knox, Kentucky as a U. S. Armored Division tank driver. He served in Germany for one year. After leaving the Army, he returned to his home town where he met and married Anne Morefield whose father was the pastor of the Crisfield Church of God. He and Anne moved to Seaford, Delaware and he worked at Dupont until moving to Cleveland in 1949 to attend Lee College. While attending Lee College, he worked part-time at the Church of God Publishing House. Upon graduating from Lee he was hired full-time as the Supervisor of the Shipping Department. He worked for the Church of God for a total of 43 years having transferred from the Publishing House to the International Offices in 1970 to manage the organization’s Insurance Program. He and his wife continued to live in Cleveland for 66 years and in 2015 they moved to Monteagle to be near their daughter, Joan. They celebrated their 72nd wedding anniversary on October 13, 2019. He was a very active and faithful member of the North Cleveland Church of God, serving on the Pastor’s Council as well as teaching the Junior High boys’ Sunday school class for a number of years. When the Westmore Church of God was organized, he and Anne transferred their membership and became charter members of Westmore. He continued teaching the same age boys in Sunday school for a total of 20 years. At Westmore, he served on the Pastor’s Council and other committees as well. In addition to serving on the local church committees, he served as the Chairman of the Trustee Committee for the International Church of God for 45 years. He also served as a member of the Lee University Construction Committee for more than 25 years. He is survived by his wife of 72 years, Anne Thomas of Monteagle, Tennessee and formerly of Cleveland, son, Billy, of Cleveland, daughter Joan of Sewanee, Tennessee, two grandchildren April Thomas of Nashville, Tennessee and Josh Thomas (wife Jessica) of Atlanta, Georgia ,great granddaughter Jordan and great grandson, Jaxon. Also surviving are his sisters; Naomi Carmine and Becky Evans of Crisfield, Maryland, Tillie Green of Cleveland, Tennessee, Presteen Thomas of Laurel, Delaware. Brothers; Johnny and wife of Salisbury, Maryland, James of Westover, Maryland and sister-in-law, Florence Thomas of Princess Ann, Maryland. The Remembrance of Life Service will be conducted on Tuesday, October 29, 2019 at 2:00 P. M. at the Westmore Church of God with Reverend Wendell Smith and Reverend Dan Black officiating. Interment will follow in the Sunset Memorial Gardens with Reverend Lloyd Frazier officiating. The family will receive friends from 1:00 until 2:00 P. M. prior to the service on Tuesday at the Church. The Jim Rush Funeral and Cremation Services North Ocoee Chapel has charge of the arrangements. You may share your condolences and your memories with the Thomas family at www.jimrushfuneralhomes.com.

Joshua (Josh) Thomas went to be with the Lord on October 27, 2019. He was born in Crisfield, Maryland on February 2, 1927. He joined the Army in 1945 and took his basic training in Fort Knox, Kentucky as a U. S. Armored Division tank driver.... View Obituary & Service Information

The family of Joshua "Josh" Thomas created this Life Tributes page to make it easy to share your memories.

Send flowers to the Thomas family.