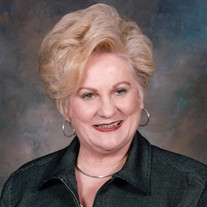 Judy Waits Grissom went to be with her Lord this past Saturday, August 8, 2020. She was born on January 15, 1940 in Bremen, and grew up in Birmingham, Alabama. She joined the Church of God at six years of age at Pike Avenue Church of God in Birmingham. She graduated from Ensley High School in 1958. She married David Rogers and moved to Kilpatrick, Alabama, and they had two children, Keith and Susan. After David’s passing she returned to Birmingham and spent several years there before she met Bob Blackaby at the Church of God General Assembly, and married in 1971. He brought his son, Kevin, to this union, and they had a child of their own, Robb. Bob and Judy ministered in pastoral appointments in several states. Judy also spent seventeen years during this time working in the Tennessee State Executive Offices. Bob went on to be with the Lord in 2004. Judy met Tom Grissom in 2011 and got married in 2012. They spent eight years as sweethearts. They loved being with their grandchildren and friends. She is preceded in death by two husbands, David Keith Rogers Sr. and Robert Earl Blackaby; brother David “Sonny” Waits and sister Jane Diane Davis; daughter Jane Susan Rogers. She is survived by her husband, Tom Grissom; children Ketih Rogers Jr, Kevin and Vernice Blackaby, and Robb and Kim Blackaby; Five grandchildren, Phil and MacKenzie Brooks, Nathan Brooks, Anna Claire, Jane, and Grace Blackaby; three great grandchildren, Colt, Wesly, and Elliot. A private Remembrance of Life Service will be held graveside at Sunset Memorial Gardens with Rev. Raymond Hodge officiating. The family will have a public visitation with social distancing Thursday from 10 until 12 pm at Jim Rush Funeral and Cremation Services North Ocoee St. Chapel. The family will schedule a Celebration of Judy’s life at a later date. The family requests that in lieu of flowers please make donations in Judy’s honor to the Jail/Prison Ministry at North Cleveland Church, Operation Compassion and or Amazing Grace Christion Foundation. These ministries were dear to Judy’s heart. Due to current COVID-19 regulations, our staff is committed to taking care of our quests and families that we serve. Please understand we will be following the State’s COVID guidelines. We also ask all guests and family members attending visitations and services to please bring and wear a mask.

Judy Waits Grissom went to be with her Lord this past Saturday, August 8, 2020. She was born on January 15, 1940 in Bremen, and grew up in Birmingham, Alabama. She joined the Church of God at six years of age at Pike Avenue Church of God in... View Obituary & Service Information

The family of Judy Waits Blackaby Grissom created this Life Tributes page to make it easy to share your memories.

Judy Waits Grissom went to be with her Lord this past Saturday,...

Send flowers to the Grissom family.