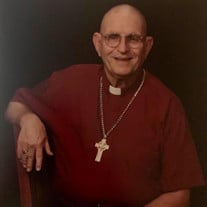 Monsignor Lawrence Francis Everett P.Psy.D, 84 of Cleveland, Tennessee entered the gates of heaven Monday March 22, 2021. He was born in Louisville, Kentucky to the late Hobart and Lillian Everett. He was also preceded in death by his loving and devoted wife of forty-five years, Clara Dar-Lene (Arnold) Everett. Together, they raised their two daughters, Teresa and Nancy Lee in Tampa, Florida. At the age of nine, Lawrence had his own newspaper delivery route. At 12, he sold ice cream after school. He graduated the 12th grade from Jefferson High school in Tampa, Florida, earning an Athletic Letter in basketball. He worked for the City of Tampa Road Department and learned the process of making grits with Dixie-Lilly. In 1963, he received an Honorable Discharge from the Army of the United States of America. After 30 years of service to National Gypsum Company, where he made Gypsum wallboard in Tampa Florida, he served as Chaplain for hospitals and hospices along the Gulf Coast. Early in his life, Lawrence knew he was called by God to the ministry. He attended school at night and after years of pursuing his education and working full time, he obtained a Master in Pastoral Psychology. In 1996, he earned a Degree of Doctor of Pastoral Psychology. He is survived by his daughter, Teresa L. Thigpen (Hugh) of Cleveland, Tennessee, and daughter Nancy Lee Everett, also of Cleveland, Tennessee. Others left to cherish his memory are his five grandchildren: Samantha Holloway (Zach), Jeffery Widener (Susan), Christina Baker (Kris), Charlotte Ann Price (John David), and Laura Thigpen. Others who called him “Pappy” are his ten great-grandchildren: Grayson Daniel Holloway, Colton Everett Widener, Reagan Olivia Price, Hudson James Baker, Annsley Raye Widener, Stella Grace Price, Sawyer Jude Baker, Riley Butler, Ryker Butler, and Adlai Headrick. As a young man, Lawrence often spent time at the beach. He also enjoyed tennis and playing on the softball team for the Lutheran Church of the Good Shephard. He enjoyed playing checkers with his friends and family, writing poems and other works of literature, and continuing his study of the Bible. One of his greatest pleasures was sports. From college to professional basketball, baseball and football, he was the biggest Florida Gators fan of all time! A heartfelt “GO GATORS” would certainly bring him a smile, even on the cloudiest of days. He will be forever missed by his family and community. A Remembrance of Life Service will be held Thursday at 3pm at Jim Rush Funeral and Cremation Services North Ocoee St. Chapel with Mr. Everett’s long-time friend and colleague (not a Gator fan) Chaplain Patrick Davis. The family will receive friends from 2 until 3pm Thursday at the funeral home. In lieu of flowers and in memory of Mr. Everett, donations can be made to The American Diabetes Association at www.diabetes.org/diabetes/donation. If you are unable to attend the Celebration of Lawrence’s life Thursday you can go to www.jimrushfuneralhomes and then to his memorial page/obituary and click on the link below. https://www.oneroomstreaming.com/view/authorise.php?k=1616544271107325

Monsignor Lawrence Francis Everett P.Psy.D, 84 of Cleveland, Tennessee entered the gates of heaven Monday March 22, 2021. He was born in Louisville, Kentucky to the late Hobart and Lillian Everett. He was also preceded in death by his loving... View Obituary & Service Information

The family of Lawrence Francis Everett created this Life Tributes page to make it easy to share your memories.

Send flowers to the Everett family.