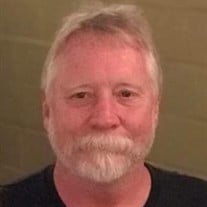 Marcus James Robert Johnson, of Cleveland, TN, aged 59 years, went to meet his Lord and Savior Jesus Christ on May 2, 2022, surrounded by his loving family after a lengthy illness. Marc was born to Jack and Clemmie Johnson on December 19, 1962 and was a life-long resident of Cleveland. He attended Waterville Elementary, Trewitt Junior High and Calvary Christian Schools. Marc began working for Calvary Baptist Church and later joined Brown Stove Company where he spent more than 25 years. Starting on the line, Marc worked up to a supervisor position. He most recently worked for Doss Motors. Marc was a life-long racing enthusiast both on and off the track. It has been said he may have been Dale Earnhardt’s biggest fan. Marc enjoyed good music, fast cars, motorcycles, and spending time with his family and friends. He was well known at the former Cleveland Speedway where he started a career as a young pit crew member for his Uncle Leonard Goins’ racing team. Marc eventually drove car # 68 for the team with several wins and places. Most recently Marc found a home as a crew chief for Paul Doss Racing where they treated him like part of the family. He felt the same for them. Marc is survived by his daughter and son-in-law Sherry and Bowdie Hyde, son Corey Cook, mother Clemmie Freeman, and brother Tim Jenkins, all of Cleveland, as well as two sisters Patricia Reese of Whitwell, and Freda Varnell of Ooltewah, two grandchildren Avery Carter and Dallas Hyde, one niece, Emily Hyberger of Cleveland and four nephews Eric Varnell of East Ridge, Brandon Varnell of Ooltewah, and Kyle Varnell and Robert Gamble of Cleveland. He was preceded in death by his father William Jackson Johnson of Cleveland, paternal grandparents Calvin and Kattie Johnson, maternal grandparents Leonard and Tiny Ellen Goins of McDonald, niece Amber Jenkins Hyberger, nephew Adam Gamble, as well as several aunts, uncles and cousins. Marc’s final days were assisted by the loving professionals at Hearth Hospice. Also, Marc would have loved the fact that he got a little extra throttle from Jim Rush Funeral Home. The family will receive friends at Jim Rush Funeral and Cremation Services Wildwood Ave. Chapel on Thursday, May 5th from 4 p.m. to 6 p.m. followed by a Celebration of Life Service with Rev. Toby Brogdon and Rev. Wally Varnell officiating.

Marcus James Robert Johnson, of Cleveland, TN, aged 59 years, went to meet his Lord and Savior Jesus Christ on May 2, 2022, surrounded by his loving family after a lengthy illness. Marc was born to Jack and Clemmie Johnson on December 19,... View Obituary & Service Information

The family of Marcus "Marc" James Robert Johnson created this Life Tributes page to make it easy to share your memories.

Send flowers to the Johnson family.