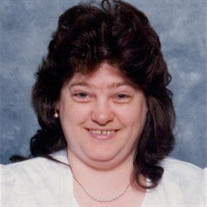 Mary Espy, age 57, a resident of Harrison, Tennessee, passed away Thursday, October 31, 2019 at the family residence. Mary was the daughter of the late Mildred Mae Johnson Verner and John William Wright. Her husband, Carlton Espy, her brother, Eldon Wright and her half brother, David Wright also preceded her in death. Mary worked for a number of years as a nurses assistant with Sweetwater Nursing Home. She enjoyed dancing but most of all she loved spending time with her grandchildren. Mary was a member of the Sweetwater Church of The Nazarene. Survivors include her daughter, Mary Ann Orr and her husband Chris of Harrison, her son, Johnny Shipley of Sun Bright, Tennessee, her grandchildren, Summer Shipley of Sweetwater, Billy Joe Henderson Jr., Andrew Orr both of Harrison, Jonathan Shipley of Sweetwater, her great grandchild, her sisters, Wilma Verner, Vickie Stillwell and her husband Stevie all of Sweetwater, her step mother, Sandra Wright, her half sister, Kimberly Wright, her half brother, John "Hippie" Wright and several nieces and nephews also survive. The Remembrance of Life will be conducted on Saturday November 2, 2019 at 3:00 P. M. at the Jim Rush Funeral and Cremation Services North Ocoee Chapel with Reverend Randall Chestnut officiating. Interment will follow in the Grasshopper Cemetery in Hamilton County with family and friends serving as casket bearers. The family will receive friends from 1:00 until 3:00 on Saturday at the Jim Rush Funeral and Cremation Services North Ocoee Chapel who has charge of the arrangements. You may share your condolences and your memories with Mary's family at www.jimrushfuneralhomes.com.

The family of Mary Espy created this Life Tributes page to make it easy to share your memories.

Send flowers to the Espy family.