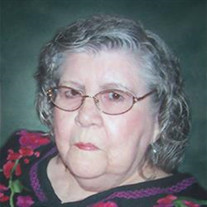 Mary Ellen Jones, 86, passed away on Thursday, September 12th, 2019. She was a lifelong resident of Cleveland. She was an accomplished sewer that made many items for family and friends throughout the years. She worked at American Uniform for over 40 years. She loved the Lord, read her Bible, prayed, and encouraged those around her to do the same. She loved and adored her family beyond measure and selflessly helped anyone that she could. She was preceded in death by her Father and Mother Charles and Ruby Beck, all of her brothers and sisters-whom she loved dearly, her beloved husband Carl Jones, adored son Steve Jones, a very special son-in-law Doug Wade, and many others that were very dear to her heart. She is survived by Daughters Carlotta Wade, Ruth Blackwell (Roy), Lisa Dickson (Bill) and a very special Daughter- in-law Rhonda Jones. Grandchildren Shelby Ownbey(Geoff), Brandi Cheatham (Jason), Karen Calhoun (Brandon), Robin Kittell(Chuck), Dakota Leamon (Courtney), Dallas Leamon (Brooklyn), Deana Merkel(Shane), Jeana Belcher(Billy), and Stephanie Richardson (Shawn). She also leaves behind several Great Grandchildren, Great Great Grandchildren, and several nieces and nephews that loved her and checked on her often. As she is now united with her Heavenly Father and her dear loved ones, she will be missed everyday by us all. A Remembrance of Life Service will be held at 2 o’clock Sunday at Jim Rush Funeral and Cremation Services North Ocoee St. Chapel with Pastor Mike Wallin officiating. The interment will follow at Michigan Ave. Baptist Church Cemetery with Dakota Leamon, Dallas Leamon, Jason Cheatham, Billy Belcher, Shawn Richardson, Geoff Ownbey, and Chuck Kittell serving as casket bearers. Honorary Pallbearers are: Alan Miller, Don Wade, and Michael Brock. The family will receive friends Sunday from 12 noon until 2pm at the funeral home.

Mary Ellen Jones, 86, passed away on Thursday, September 12th, 2019. She was a lifelong resident of Cleveland. She was an accomplished sewer that made many items for family and friends throughout the years. She worked at American Uniform... View Obituary & Service Information

The family of Mary Ellen Jones created this Life Tributes page to make it easy to share your memories.

Send flowers to the Jones family.