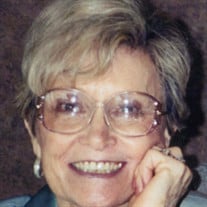 Mary Helen Park White, passed away Wednesday, January 15, 2020 in a local health care facility. Mrs. White was born December 17, 1923 to the late Beulah Baker Park and Grover Park. She grew up in the Ball Play community in Polk County and the Tennga, Georgia area, later moving to Cleveland. She was also preceded in death by her husband, William Don White and 8 brothers and sisters, Robert Park, Revis Park, Woodrow Park, Betty Park, Nell Hilliard, Beulah Brooks, Jody Greene and Hazel Phillips. Mrs. White was employed as a nurse at Bradley Memorial Hospital for many years and retired from the office of Dr. Frank K. Jones. Survivors include her daughter, Judy Griffith, her son, Jeffery Griffith both of Cleveland, her grandchildren, Todd Beck, Kristi Beck, AnnaLea Elliott and Allison Oliver, her great grandchildren, Taylor Jennings, Noah Bowen, Cameron Bowen, William Park Oliver and Shephard Elliott, many special nieces, nephews and her many grand dogs also survive. The Remembrance of Life Graveside Service and Interment will be held at a later time and date. She will return home to be re-united with her family at Liberty Baptist Church Cemetery in Tennga, Georgia. Due to her love of animals, the family request in lieu of flowers, memorials may be made to the Cleveland Animal Shelter, 360 Hill Street, Cleveland, Tennessee 37311. The Jim Rush Funeral and Cremation Services North Ocoee Chapel has charge of the arrangements. You may share your condolences and your memories with the family at www.jimrushfuneralhomes.com.

The family of Mary Helen Park White created this Life Tributes page to make it easy to share your memories.

Send flowers to the White family.