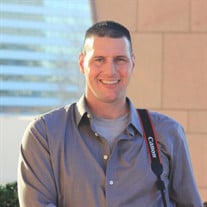 Michael (Mike) Goniea age 43, a resident of Goshen, KY, passed away on Monday April 19, 2021 at the University of Louisville Hospital in Louisville, KY, following a tragic accident on the previous Friday afternoon. Mike was born in Wyandotte, MI and spent most of his youth in Cleveland, TN where he graduated from Bradley Central High School in 1996. Mike married his high school sweetheart, DeVonna Garren in 1996 and he served four years in the Air Force as an F-15 aircraft mechanic at Eglin Air Force Base in Florida and several other military locations. Mike was dedicated to taking care of his family whether in Tennessee, Florida, Alabama, Kansas, California, or Kentucky. Mike’s final act of kindness was to give the gift of life through organ, eye, and tissue donation, a decision he made to donate life so others could live it. Mike was preceded in death by his wife, DeVonna Goniea, May 29, 2015. He is survived by two sons Hunter Goniea of Lake Arrowhead, CA and Tucker Goniea of Goshen, KY, mother and step-father, Linda and Don Coffey of Rockwood, TN, father and step-mother, Ronald and Christine Goniea of Cleveland, brother Jason Goniea of Rockwood, step-brothers Don Coffey II and wife Lora of Knoxville, TN, Joshua Coffey of Knoxville, and Matthew Coffey and wife Alexandra of Cleveland, nieces, Ashleigh Goniea and Summer Davis of Albuquerque, NM, Lilly Coffey and Regan Coffey of Cleveland and nephews, Cody Goniea of Albuquerque, and Garrett Coffey, of Knoxville and many other extended family members. A Remembrance of Life Service will be held at 1pm Saturday at Jim Rush Funeral and Cremation Services North Ocoee St. Chapel with Rev. Joe Parker officiating. The entombment will follow at Sunset Memorial Gardens with Hunter Goniea, Tucker Goniea, Jason Goniea, Joshua Coffey, Cody Goniea, and Randall Bibee serving as casket bearers. The family will receive friends Saturday from 11 until 1pm at the funeral home. The family requests that in lieu of flowers donations be made in Mike’s honor to the Shriner’s Hospitals for Children. You can make a donation by going to www.shrinershospitalfor children.org/shc/donate. You can view the service via livestream by going to Mike’s obituary page at www.jimrushfuneralhomes.com and clicking on the link below. https://view.oneroomstreaming.com/authorise.php?k=1619135928112071

Michael (Mike) Goniea age 43, a resident of Goshen, KY, passed away on Monday April 19, 2021 at the University of Louisville Hospital in Louisville, KY, following a tragic accident on the previous Friday afternoon. Mike was born in Wyandotte,... View Obituary & Service Information

The family of Michael William Goniea created this Life Tributes page to make it easy to share your memories.

Send flowers to the Goniea family.