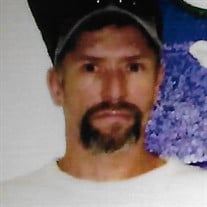 Michael Ray Prueitt, age 52, a resident of Birchwood, passed away Sunday, January 5, 2020 in a health care facility in Nashville. Michael was the son of the late Patsy Montana Bales Prueitt and Howard Casto Prueitt. His brother, Jody Prueitt also preceded him in death. Michael worked most of his life in Construction along with his brother. He loved the outdoors including hunting, fishing and being on the water. Michael attended the Church of God. Survivors include his wife, Tammy Prueitt of Birchwood, his son, Christopher Quinn of Rossville, Georgia, his daughters, Teesha Flegal also of Rossville, Tracy Snyder of Birchwood, Christa Jennings of Decatur and Brandy Aaron of Ringgold, Georgia, his 12 grandchildren, his sister, Lisa Michelle Wilkey of Red Bank, his brother, Howard Lynn Prueitt of Hixson, Richard Steven Prueitt of Harrison, Terry McRoy also of Hixson and several nieces and nephews also survive. The Remembrance of Life Graveside Service and Interment will be conducted on Friday, January 10, 2020 at 2:00 P. M. at the McInturf Cemetery in Meigs County with Reverend Kenneth Bales officiating. Family and friends will serve as casket bearers. The Jim Rush Funeral and Cremation Services North Ocoee Chapel has charge of the arrangements. You may share your condolences and your memories with Michael's family at www.jimrushfuneralhomes.com.

The family of Michael Ray Prueitt created this Life Tributes page to make it easy to share your memories.

Send flowers to the Prueitt family.