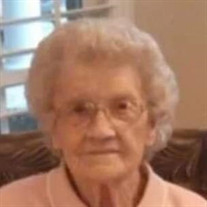 Opal Spencer Brown, age 100, a resident of Cleveland, passed away Sunday, April 14, 2019 in a local health care facility. Mrs. Brown was the daughter of the late Savannah Wright Thompson and John Thompson. Her first husband, Dick Spencer, her second husband, David Brown, her son in law, Frank McCullough, her sisters, Bessie Hayes, Mary Owens, Lena Maddux, Eula Mae Cartwright and Savannah Duckett and her brothers, R. V. Thompson and Jim Murphy also preceded her in death. Mrs. Brown was retired from American Uniform Company with 29 years of service. She was known for being a great cook and she enjoyed working word puzzles and listening to Gospel music. Mrs. Brown was a member of the Washington Baptist Church. Survivors include her daughter, Frances McCullough, her son, Richard "Dickie" Spencer Jr. and his wife, her special daughter in law, Juanita all of Cleveland, her grandchildren, Eric Spencer and his wife Sheila, Robin Spencer, Tina Potts and her husband Greg, Steve McCullough and his wife Kammy, Mitch Chastain and his wife Penny and Mike Chastain, several great and great great grandchildren, her brother, Pat Murphy and his wife Veneer of Cleveland and several nieces and nephews also survive. The Remembrance of Life Service will be conducted Thursday, April 18, 2019 at 2:00 P. M. at the Jim Rush Funeral and Cremation Services North Ocoee Chapel with Reverend Daniel White officiating. Interment will follow in the Hilcrest Memorial Gardens with her grandsons and great grandsons serving as casket bearers. The family will receive friends from 12:00 until 2:00 P. M. Thursday at the Jim Rush Funeral and Cremation Services North Ocoee Chapel who has charge of the arrangements. You may share your condolences and your memories with the Spencer-Brown Families at www.jimrushfuneralhomes.com.

The family of Opal Spencer Brown created this Life Tributes page to make it easy to share your memories.

Send flowers to the Brown family.