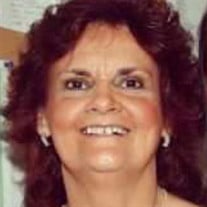 Randy Gail Stafford Baxter, age 69, passed away Thursday April 11, 2019 in a Chattanooga hospital. She was a resident of Cleveland, retired from Schering Plough, was a member of Washington Avenue Baptist Church. She was preceded in death... View Obituary & Service Information

The family of Randy "Gail" Stafford Baxter created this Life Tributes page to make it easy to share your memories.

Send flowers to the Baxter family.