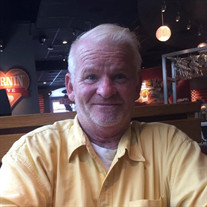 Richard Curtis Fitzpatrick, 61 years 11 months, and 28 days passed away in the hospital in Cleveland, TN. Richard was born November, 30 1958 in Kalamazoo, MI. He is preceded in death by his father, Calvin Curtis Fitzpatrick, and a brother Jerry Austin Buck and all his grandparents. He leaves behind to cherish his memories; a wife of 23 years Ruth, a daughter, Glori of Cleveland TN, and a son Adam of Los Angeles, CA. His mom and dad, Mary and John Kilen, of Cleveland, TN. and 3 sisters, Gloria Fitzpatrick and Judy Fitzpatrick of Cleveland TN, and Lisa (Jerry) Ambrose of Bingham Lake, MN., 3 brothers, William Buck of Kalamazoo, MI, Jack Fitzpatrick of Jacksonville, FL and Calvin Fitzpatrick of Mankato, MN and many nieces and nephews. Richard graduated high school in Kalamazoo, MI. before enlisting in the United States Navy where he was a Chief Engineer for 20 years. He then started a family in San Diego CA., It was there in San Diego he became a member to the Bethany Assembly of God Church staying close to God. Then he moved to Cleveland, TN in 2013 he stayed a member of his church by phone praying for anyone who needed a prayer or scripture from the bible. It was his pleasure to talk or pray with anyone, even working at Home Depot for many years, everyone knew Richard would talk of God or pray for them when needed. He will be missed by many. Jim Rush Funeral and Cremation Services Wildwood Ave. Chapel has charge of the arrangements.

Richard Curtis Fitzpatrick, 61 years 11 months, and 28 days passed away in the hospital in Cleveland, TN. Richard was born November, 30 1958 in Kalamazoo, MI. He is preceded in death by his father, Calvin Curtis Fitzpatrick, and a brother... View Obituary & Service Information

The family of Richard Curtis Fitzpatrick created this Life Tributes page to make it easy to share your memories.

Send flowers to the Fitzpatrick family.