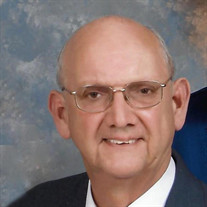 After battling a short-term illness, Richard Clark Watson of Cleveland, TN, age 77, relocated to his new Heavenly address. He had prepared for his earthly departure, while residing in a single wide trailer, in Chatsworth, GA, 53 years ago, when he accepted Jesus Christ as his Lord and Saviour. Throughout the years, while serving his Lord Jesus Christ, he pastored many churches in the local area, and he humbly requests that each and everyone that he had ever met join him by accepting Jesus Christ as their Lord and Savior as well. Richard was born on February 10, 1943 to his mother, Bertie Ellen Cross Watson, and father William Wheeler Watson, who passed before Richard’s birth. Richard was the youngest of 13 siblings: Nellie Beckler, Nealie Yates, Meadie Miller, Mayme Groomes, Betty Faye Maupin, Joyce Wagner (Jim), Frank Watson, Grover Watson, Lane Watson, Beecher Watson, William Henry Watson, and Billy Ray Watson (Joann). Richard is joined in Heaven by many of his siblings and will be followed there one day by his living siblings: Joyce Wagner (Jim) and Billy Ray Watson (Joann). After moving to Bradley County at a young age, Richard met the love of his life, Glenda Cartwright Watson. They married on March 7, 1964 and had three children: Keith Watson (Karen), Cheryl Watson Lee (Michael), and Eric Watson. Richard and Glenda spent their married life being ministers of the gospel. They continued their ministry into the tire business when they opened Village Tire Company in 1991. Together Richard and Glenda worked to share the love of Christ to their customers while selling tires. Richard’s last living brother, Billy Ray Watson, wrote the following regarding Richard’s life: “Richard believed in God and would not hesitate to say so, having recently said “God answers prayer!” Well Richard, God called and you answered just as you did many years ago. It wasn’t long till you picked up the Bible and started preaching from that which we all could lean on. God could have called you at the age of seven when you were stricken with Rocky Spotted Mountain Fever, but He chose to add 70 more years to your life on Earth. There’s no doubt that you made Mother proud.” Richard will be loved forever and deeply missed until his family is reunited with him in Heaven. Richard is remembered today by his wife of 56 years, three children, and six grandchildren: Austin Watson, Brandon Lee, Summer Kaylor Watson, Rebecca Watson Starkes (Trey), Britney Lee, and Hannah Watson. The family will receive friends Friday from 5 until 8pm at Jim Rush Funeral and Cremation Services North Ocoee St. Chapel. A private graveside service will be held. Out of the abundance of caution the family requests that everyone that will attend the visitation wear a mask and practice social distancing.

After battling a short-term illness, Richard Clark Watson of Cleveland, TN, age 77, relocated to his new Heavenly address. He had prepared for his earthly departure, while residing in a single wide trailer, in Chatsworth, GA, 53 years ago, when... View Obituary & Service Information

The family of Reverend Richard Watson created this Life Tributes page to make it easy to share your memories.

After battling a short-term illness, Richard Clark Watson of...

Send flowers to the Watson family.