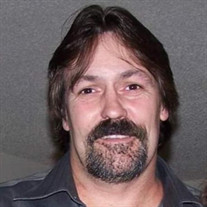 Ricky Lynn Rogers, of Cleveland TN, 57, passed away on Monday, April 20, 2020 from a fatal gunshot wound received protecting someone being attacked. He was a former employee of Brown Stove Works, Peyton’s, Waupaca, and Rubbermaid. Everyone liked him, and he made friends wherever he went. He drew children to him like a magnet and he loved being around them, too. He was a fun, funny guy. He loved to eat and could put away a ton of food. He was of the Baptist faith and had attended several churches in and around the Cleveland, TN area. He is preceded in death by his mother, Linda Sue Cobb Rogers. Survivors include father and step-mother, Billy Ray and Judy Rogers of Cleveland, TN; one daughter and son-in-law, Leigh Anne and Brian Breedlove, two grandsons, Caleb Alexander and Ezra Nathaniel Breedlove (due in July 2020) all of Delano, TN;his companion Riza Degorio and her daughters Shareen and Dhakeriah, his brother and sister-in-law, Charles Ray and Jean Rogers of Cleveland, TN and brother, Ronnie Rogers of Old Fort, TN, sister and brother-in-law, Alma and Randall Chastain of Dalton, GA; 7 nephews and nieces; and 7 great-nephews and nieces. Jim Rush Funeral and Cremation Services has charge of the arrangements. Funeral arrangements will be announced. The family request that in lieu of flowers, please make donations to any charity that funds the reduction of gun violence in the United States, but not ones that infringe on gun rights of American citizens.

Ricky Lynn Rogers, of Cleveland TN, 57, passed away on Monday, April 20, 2020 from a fatal gunshot wound received protecting someone being attacked. He was a former employee of Brown Stove Works, Peyton&#8217;s, Waupaca, and Rubbermaid. Everyone... View Obituary & Service Information

The family of Ricky Lynn Rogers created this Life Tributes page to make it easy to share your memories.

Ricky Lynn Rogers, of Cleveland TN, 57, passed away on Monday,...

Send flowers to the Rogers family.