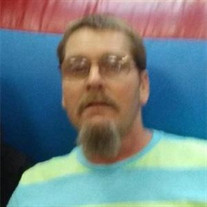 Ronny Goins, age 50, a resident of Cleveland, passed away on Sunday, August 15, 2021 at the family residence. Ronny was preceded in death by his father, David Goins, maternal grandparents, Eldon and Ada Wishon, paternal grandparents, Ollie and Tina Goins and step father, Charles Bryant. Ronny worked in landscaping most of his life. He enjoyed fishing but most of all he loved his dogs, "T. J.", "Mattie", his favorite, "Jayla" and "Jazzy". Ronny was a Christian. Survivors include his mother, Anne Bryant of Cleveland, sisters, Debra Goins, (Alan Rednose), Athens, B. J. Bryant, Cleveland, brothers, Wesley Bryant, Randy Bryant both of Cleveland, aunt, Peggy Wishon, uncle, Billy Wishon, both of Cleveland, nieces, Erica Ellison, (Daniel Bonior), Virginia, Kayla Ellison, (Nayib Villegas), Cleveland and great niece, Indica Bonior of Virginia. There will be no formal services for the family at this time. The Jim Rush Funeral and Cremation Serivces Wildwood Chapel has charge of the arrangements. You may share your condolences and your memories with Ronny's family at www.jimrushfuneralhomes.com.

The family of Ronny Goins created this Life Tributes page to make it easy to share your memories.

Ronny Goins, age 50, a resident of Cleveland, passed away on...

Send flowers to the Goins family.