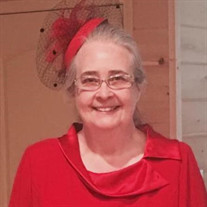 Sheila Payne, 62-years-old, died Monday January 13th, 2020, at her home. Sis. Sheila as she is known by countless people she attended church with, fought an unwavering battle with Stage 4 Cancer for over four years until our Heavenly Father chose to bring her to Him and her heavenly reward. A woman of faith and the heart of her church Staffordtown in Copperhill, Tn. Sheila displayed a tireless Christian example, praying for anyone that was in need and showing love and compassion to those around her even in the days that she would struggle in her own health. The past few months she wouldn’t leave the house much in order to save every ounce of energy so she would be able to make the hour-long journey to church, where she would lead the service and encourage others to follow Jesus and to pray on till God turned it around. She was a beautiful, kind, loving, and strong Christian woman with at times what could be a savage sense of humor. She devoted her time to doing what she felt was her calling, lifting others up to Jesus and supporting her church with Godly service. She was a spiritual mother to many in the area where she was deeply loved and held high in esteem by her family and friends. A role model of a Godly woman and aspired others to follow in her footsteps. Sheila was born on May 8th (or 9th she was born at home so it might be a bit fuzzy) 1957 in Dial, Georgia to John and Othello Wynn. She met Gary Payne the love of her life at Staffordtown church while noticing him across the aisle of church. She played the cymbals and made sure to play them loud enough for him to notice, she told her dad she was going to marry him before they even officially talked and as usual, she was right, they where married October 24th, 1975. Sheila will be missed by those that held her dear including her father John Wynn, and husband Gary Payne, mother-in-law Mary Jo Payne. She was the only girl amid three brothers - Johnny Wright, Tommy Wright, and Anthony Wynn along with their three beautiful spouses Karen Wright, Cherie Wright, and Shelia Wynn. Brothers and sisters-in-law Dale and Peggy Payne, L.D. and Teresa Payne. Her son Justin and spouse Ruby (who was her daughter and her companion in crime for 20 years), along with two wonderful grandchildren who where the center of her prayers and heart, Abigale and Jentezen. Abigale and her husband Darius are expecting their first child in May and we know that Sheila (mom) would loved to have been able to hold that great grand baby. She has many nieces and nephews that she loved, mentored, and cared for. Also, she will be dearly missed by her home church Staffordtown Church in Copperhill, Tn and her close friends at MDT Church in Riceville, Tn. She was preceded in death by her mother Othello Wynn, and her father-in-law Lloyd Payne along with Bother-in-law’s Pedro (Renee) and Timmy (Amy) Payne, and Sister-in-Law Patricia (Jay) Lewis. We can only imagine the time they all are having today on those streets of gold in Heaven! Sheila wouldn’t want you to be sad or to mourn too long, she is now with the one that she loved the most her Jesus and I believe if she would leave some lasting words it would be “Come on Saints, he is a good God” The Remembrance of Life Service will be conducted on Thursday, January 16, 2020 at 7:00 P. M. at the Jim Rush Funeral and Cremation Services North Ocoee Chapel with Pastor Justin Payne and Pastor Anthony Wynn officiating. Graveside Services and Interment will be conducted on Friday at 1:00 P.M. at the Payne Family Cemetery in Riceville, Tennessee. Robert Champion, Micah Wynn, Denny Payne, Nathaniel Payne, Evan Payne, Corey Payne, Tim Branum and Tyke Prince will serve as casket bearers. In lieu of flowers, Sister Sheila and Bro Gary ask that you donate to Staffordtown Church New building fund. PayPal: [email protected] or mail to 247 Co. Rd 677 Riceville, TN 37370. The family will receive friends from 4:00 until 7:00 P. M. Thursday at the Jim Rush Funeral and Cremation Services North Ocoee Chapel who has charge of the arrangements. You may share your condolences and your memories with Sheila's family at www.jimrushfuneralhomes.com.

Sheila Payne, 62-years-old, died Monday January 13th, 2020, at her home. Sis. Sheila as she is known by countless people she attended church with, fought an unwavering battle with Stage 4 Cancer for over four years until our Heavenly Father... View Obituary & Service Information

The family of Sheila Wynn Payne created this Life Tributes page to make it easy to share your memories.

Send flowers to the Payne family.