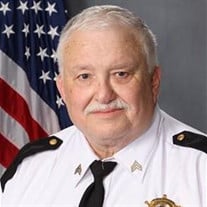 Stephen A. "Steve" McCollum, age 64, a resident of Cleveland, passed away Tuesday, July 9, 2019 in a local hospital. Steve was the son of the late Jacqueline E. Ledford McCollum and Hubert Whitworth McCollum. His cousin, Al McCollum, who passed away in the line of duty with Bradley County Rescue and a host of other family members also preceded him in death. Steve was a graduate of Cleveland High School. He received his B. A. degree in music from Tennessee Wesleyan in Athens, Tennessee and for his recital exam, he played drums for Chet Atkins band. He received his Masters degree in Education from the University of Tennessee, Knoxville. He had 42 years in Law Enforcement before retiring in 2018. He served for 6 years as the Chief of Police for Charleston, Tennessee and 36 years working as a Sheriff's Deputy for the Bradley County Sheriffs Department, retiring with the rank of Sgt. Steve loved firearms and was a firearm instructor. He also taught music. He served as an Instructor for the Police Academy, teaching self-defense including Bando instruction, a form of martial arts. He also served as a volunteer in the Tennessee Defense Force. He loved to cook and wanted to be a chef. He was a Lifetime member of the National Rifle Association, N.R.A., and the Cleveland Gun Club. He also was a member of the Police Benevolent Association and he was a Mason. Steve loved spending time with his family and he attended the Westmore Church of God. Survivors include his loving wife, Ivette McCollum of Cleveland, his daughters, Noemi Guyton and her husband Brandon also of Cleveland, Raquel Brown and her husband Christopher of Calhoun, Tennessee, his grandchildren, Kierstyn and Kristian Soto, Chandler, Taylor, Isabella and Kadence Guyton, his great grandchildren, Liam and Ella Mae Soto, his cousin, Ann McCollum Marr and his other cousins in Cleveland, Georgia also survive. The Remembrance of Life Service will be conducted Friday, July 19, 2019 at 1:00 P. M. at the Westmore Church of God with Reverend Gary Sears officiating. Interment will follow in the Sunset Memorial Gardens with the Bradley County Sheriffs Department Honor Guard serving as casket bearers. Military honors will be given. The family will receive friends from 5:00 until 8:00 P. M. Thursday, July 18, 2019 at Westmore Church of God. The family will also receive friends Friday from 11:00 until 1:00 at the Church. The Jim Rush Funeral and Cremation Services North Ocoee Chapel has charge of the arrangements. You may share your condolences and your memories Steve's family at www.jimrushfuneralhomes.com.

Stephen A. "Steve" McCollum, age 64, a resident of Cleveland, passed away Tuesday, July 9, 2019 in a local hospital. Steve was the son of the late Jacqueline E. Ledford McCollum and Hubert Whitworth McCollum. His cousin, Al McCollum, who passed... View Obituary & Service Information

The family of Stephen A. "Steve" McCollum created this Life Tributes page to make it easy to share your memories.

Stephen A. &quot;Steve&quot; McCollum, age 64, a resident of Cleveland,...

Send flowers to the McCollum family.