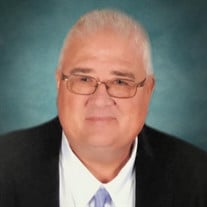 Steven Dewayne Bowers, age 58, a resident of Cleveland, passed away Monday in a local hospital. Steven was preceded in death by his father, Clarence Money Bowers, his maternal grandparents, Nola and C. B. Toomey Jr., his paternal grandparents, Hattie Reagan and her husband Ernest and Henry Bowers, his father in law, Reverend Buddy Brewer Sr., his sister in law, Delores Bowers and his step sister, Elizabeth Cross. Steven was a 1980 graduate of Bradley Central High School and he received his Associates degree from Chattanooga State. He was an Self-employed Electrician most of his life. He also coached Little League Baseball and girls Basketball. Steven was known for his piano playing and he played for several Southern Gospel Groups. Most of all, he was a family man and he loved spending as much time possible with his family! Steven was a member of the Church of God. Survivors include his wife of 39 years and his high school sweetheart, Teresa Brewer Bowers of Cleveland, his daughters, Brittany Bowers Hays and her husband Stephen of Ooltewah, Sarah Bowers Risenhoover and her husband Matthew of Cleveland, his granddaughter whom he greatly loved, Ava Claire Hays of Ooltewah, his mother, Judith Bowers Dye and her husband Robert, his brother, Alan Bowers and his wife Lisa all of Cleveland, his mother in law, Mary Lou Brewer also of Cleveland, his brothers in law, Buddy Brewer Jr. and his wife Tammy, Johnny Brewer and his wife Sandra, Mark Brewer and David Brewer, his step sister, Ruby Cross and her husband J. L. Cross, his dog, "Ziggy" and several nieces, nephews, great nieces, great nephews, aunts, uncles and cousins also survive. The Remembrance of Life Service will be conducted on Friday, March 13, 2020 at 2:00 P. M. at the Jim Rush Funeral and Cremation Services North Ocoee Chapel with Reverend Kenneth Bowers and Pastor Tim Gann officiating. Interment will follow in the Hilcrest Memorial Gardens with family and friends serving as casket bearers. The family request in lieu of flowers Memorials be made to the Polycystic Kidney Disease Foundation, [email protected] or call, 1-800-753-2873. The family will receive friends from 5:00 until 8:00 P. M. Thursday at the Jim Rush Funeral and Cremation Services North Ocoee Chapel who has charge of the arrangements. You may share your condolences and your memories with Steven's family at www.jimrushfuneralhomes.com.

Steven Dewayne Bowers, age 58, a resident of Cleveland, passed away Monday in a local hospital. Steven was preceded in death by his father, Clarence Money Bowers, his maternal grandparents, Nola and C. B. Toomey Jr., his paternal grandparents,... View Obituary & Service Information

The family of Steven Dewayne Bowers created this Life Tributes page to make it easy to share your memories.

Send flowers to the Bowers family.