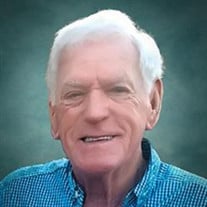 On the morning of May 2, 2021, Tommy Lee “Suds” Barrett passed away peacefully at his home comforted by the love of his family. Born the youngest child of Anna B. Hague Barrett and Walter Alexander Barrett on October 21, 1939, in Cleveland, Tennessee, he graduated from Bradley Central High School in 1958 where he was a member of the basketball team earning district, region, Tri-state and all-state honors and a member of the baseball team. After graduation, Suds served the National Guard and worked in photo composing at the Chattanooga Times, he also worked to expand recreational opportunities in his community helping Russ Melvin organize the Cleveland Midget Football League and starting a local baseball league. Suds married the love of his life, Joan Gill, and they were married 58 years until she passed earlier this spring on March 10. In 1974, Cleveland Fire, Parks and Recreation Commissioner Kenneth Tinsley offered Suds a position to run the city golf course and city parks. He served in this capacity until he succeeded Lou Fitzgerald as the Director of Parks and Recreation in 1982. Under his leadership, Tinsley Park was constructed, Johnston Park was developed, the Nina Craigmiles playgrounds were established at each of the city elementary schools, ground was broken at Fletcher Park, Mosby Park was renovated, and the Northeast Recreation Center was remodeled. Suds always thought two shots ahead and affected much change during his tenure as Director believing recreational development spurred economic development. The new Tinsley facility, which offered four softball fields, tennis courts, swimming pool, playground/picnic area and walking trails, became the premiere facility in the area and helped him attract many state and national softball tournaments to Cleveland. Suds was proud that the tournaments poured hundreds of thousands of dollars into our local economy. Suds was appointed, and served four years, Tennessee ASA District Commissioner for District 16, prior to serving as the Tennessee State Commissioner for eighteen years. During these years, more than 1,000 umpires, 1,000 adult teams, and 3,000 youth teams were registered. He also served as an ASA national vice president three different times, overseeing the organization’s operations in Tennessee, Georgia, Metro Atlanta, and North and South Carolina. Suds continued to serve USA Softball as a Commissioner Emeritus and a voting member of the National Council following his retirement in 2005, and was inducted into the USA Softball of Tennessee Hall of Fame in 2008. Suds left an indelible mark on recreation in our community and our state as a whole during his thirty-one years with the Cleveland Parks and Recreation Department. Suds was inducted into the Old Timers Hall of Fame in 2001 and was a member of the BPOE 1944 and was a proud Mason. He is survived by his son, Gill (Melissa), and daughter, Anna Jill Barrett, all of Cleveland; brother Walter Alexander “Dub” Barrett, Jr., Mr. & Mrs. Bruce (Pat) Parton; Mr. & Mrs. Wendell (Jimmie) Neeley, and numerous nieces, nephews, and cousins. A Remembrance of Life Service will be held graveside Wednesday at 3pm at Hilcrest Memorial Gardens with Rev. Jeannie Cissom and Rev. Timothy Gann officiating. Dax McGowan, Rob McGowan, Scott McGowan, Luke Benton, Parker Benton, and Chase Markiewicz will serve as pallbearers. Honorary pallbearers will be Donnie Sullivan, Keith Barrett, Mike Sullivan, Rick Sullivan, Buster Goins, and Brandon Melton. The family will receive friends on Wednesday, from 1:00p.m. until 2:30p.m. at Jim Rush Funeral and Cremation Services North Ocoee St. Chapel.

On the morning of May 2, 2021, Tommy Lee &#8220;Suds&#8221; Barrett passed away peacefully at his home comforted by the love of his family. Born the youngest child of Anna B. Hague Barrett and Walter Alexander Barrett on October 21, 1939, in... View Obituary & Service Information

The family of Tommy "Suds" Barrett created this Life Tributes page to make it easy to share your memories.

Send flowers to the Barrett family.