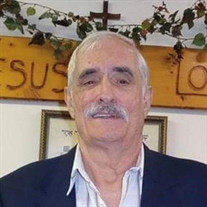 Willard R. "Will" Dixson Jr., age 67, a lifelong resident of Cleveland, went home to meet his Lord and Savior on Thursday, September 19, 2019 while on vacation in Florida. Will, as he was affectionately known, was the son of the late Jewell Merrell Dixson and Willard R. Dixson Sr. His granddaughter, Kaylie Shyann Bankston and his nephew, David McDougal also preceded him in death. Jesus Christ and doing God's work was his life! When he posted Bible verses on Face Book, he would always sign it: "Love will, a simple servant of God." He preached in several churches and he loved people. Will loved fishing with his wife and kids and playing with his grandchildren. He loved traveling when he could and meeting new people. He was always there to help anyone who needed it. He put other peoples needs over his own, doing the Lord's work. Will was a member of the Word Church and Covenant Promise Church. Every month he supported "Back to Jesus Christian Fellowship Mission for Orphans" in the Philippines. The children there called him Pastor Will and sent him cards and letters. He leaves behind to cherish his memory his wife, Kristine Perkins Dixson; his sons, Christopher Dixson and his wife Johana, Jeremy Dixson and his wife Suzanne and Will Dixson III and his wife Jackie; his daughter, Leah Dixson; his stepsons, William Sands and Matthew Sands; his grandchildren, Sysha Blair, Gregory Henegar, Kyle Dixson, Annalyssa Dixson, Abby Dixson, Sydney Dixson, Nathan Dixson, Shalyn Dixson, Ashlyn Evans, Brianna Dixson, Lacy Duncan, Israel Davidson, Selah Davidson, Elizabeth Dixson, Serenity Dixson, Whayatt and Alexis Sands; his great grandchildren, Maylon Hicks, August Evans and Harleigh Johnson; his sisters, Lucille Boring, Juanita Picklesimer and her husband Loyd and Ramona McDougal and her husband Billy and his special friends from church also survive. The Remembrance of Life Service will be conducted on Tuesday, October 1, 2019 at 11:00 A. M. at the Jim Rush Funeral and Cremation Services Wildwood Chapel with Pastor Kenneth Elledge officiating. Interment will follow in the Fairview Baptist Church Cemetery in Greasy Creek with family and friends serving as casket bearers. The family will receive friends from 5:00 until 8:00 P. M. Monday at the Jim Rush Funeral and Cremation Services Wildwood Chapel who has charge of the arrangements. You may share your condolences and your memories with Will's family at www.jimrushfuneralhomes.com.

Willard R. "Will" Dixson Jr., age 67, a lifelong resident of Cleveland, went home to meet his Lord and Savior on Thursday, September 19, 2019 while on vacation in Florida. Will, as he was affectionately known, was the son of the late Jewell... View Obituary & Service Information

The family of Willard R. "Will" Dixson Jr. created this Life Tributes page to make it easy to share your memories.

Send flowers to the Dixson family.