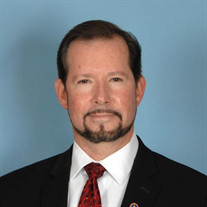 William "Bill" Scott Kozacek, age 60, a resident of Cleveland, was Born June 25, 1959 to Edward and Audrey (Logan) Kozacek in Chicago, IL, Bill grew up in Romeoville, IL and graduated from Romeoville High School in 1977. He was baptized at Trinity Lutheran Church in Lockport, IL and confirmed at Good Shepherd Lutheran Church in Romeoville, IL. He joined ROTC during high school and enlisted in the US Navy after graduation. Following his service as an Intelligence Specialist (IS2) in the Navy, Bill earned an associate degree from Joliet Junior College, and a bachelor’s degree in criminal justice from the University of Illinois. After college, he worked for a short time at the Illinois Revenue Department in Rockford, IL, and spent a long and fulfilling career with the Federal Bureau of Investigation in Kentucky and Virginia. Among his many accomplishments, he was honored with the Public Safety Leadership Award in 2018 by the International Association of Chiefs of Police. During his tenure at the FBI, Bill amassed considerable expertise as an FBI Counterterrorism Division Subject Matter Expert (SME), and overseer of training to personnel, the FBI National Academy, and other government agencies, accredited by the University of Virginia (Graduate Certificate in Adult Learning and Development). His training programs encompassed topics on ballistic research, ammunition, body armor, and firearms. Bill’s professional affiliations included membership in the Society of Former Special Agents of the FBI, International Association of Chiefs of Police - Firearms Committee, and Naval Intelligence Professionals. He retired as the Unit Chief (Supervisory Special Agent), Training Division. In 2015, Bill married the great love of his life, his wife Bess, who survives, after meeting in 2014. They attended church at The Crossing Church of God in Chattanooga. Bill is preceded in death by his father Edward, and his brother Thomas. He is survived by his mother Audrey, brothers Richard (Colleen), and Mark Kozacek, his beloved daughters Amber and Alyssa Kozacek, stepdaughter Lauren (Jay) Harding, stepsons Ben and Brett Howard, niece Samantha Kozacek, nephew Alex Kozacek, and grandchildren Eva, Lilly, and Asher Harding. Bill endeared himself to Bess’s family and friends by loving her so well, and he fit immediately into their tight-knit group. Her grown children joke that Bill knew what Bess needed even before she did, anticipating her every need. The family is thankful for the time they shared with Bill, lamenting only that it wasn’t for much longer. Bill’s daughters Alyssa and Amber were the joys of his life, and he could not have been prouder of the women they have become. He was planning to walk Amber down the aisle at her wedding this fall, and the two had recently chosen the music for the father-daughter dance. While he will surely be there in spirit, his presence will be missed at this and all future milestones, and the void he leaves will be felt always by his mother, wife, and family. For this reason, we are so very thankful for the hope of heaven. The Celebration of Life Service will be conducted on Friday, March 6, 2020 at 12:00 P. M. at The Crossing Church, 7501 Standifer Gap Road, Chattanooga, Tennessee 37421, with Chaplain Bonnie Holcombe Fontana officiating. Graveside Services and Interment will follow in the Chattanooga National Cemetery, 1200 Bailey Avenue, Chattanooga Tn. at 1:30 P. M. Military Honors will be given. The family request that in lieu of flowers, Memorials be made to the Navy-Marine Corps Relief Society online at or call 800-654-8364. The family will receive friends from 10:00 until 12:00 Friday at The Crossing Church. The Jim Rush Funeral and Cremation Services North Ocoee Chapel has charge of the arrangements. You may share your condolences and your memories with the Kozacek family at www.jimrushfuneralhomes.com.

William "Bill" Scott Kozacek, age 60, a resident of Cleveland, was Born June 25, 1959 to Edward and Audrey (Logan) Kozacek in Chicago, IL, Bill grew up in Romeoville, IL and graduated from Romeoville High School in 1977. He was baptized at Trinity... View Obituary & Service Information

The family of William "Bill" Scott Kozacek created this Life Tributes page to make it easy to share your memories.

Send flowers to the Kozacek family.